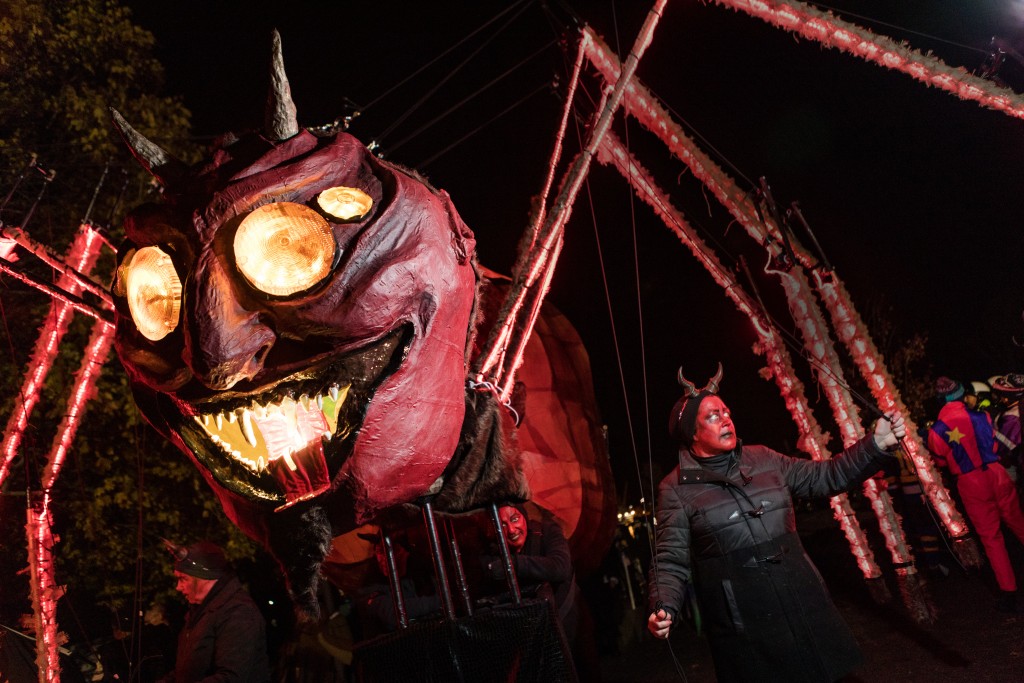 The Portsmouth Halloween Parade is back for another night of spooky fun on October 31. Photo by Kendal J. Bush

By the time we published this article, the following events were still going forward as planned. However, due to evolving information about Covid-19, it’s possible some were canceled or postponed. Please confirm events are happening before heading out!.

Pumpkins aren’t the only produce to show a bit of love to this month. Dover’s fall fest focuses on the season’s sweeter favorite, with a 300-strong crafter fair, live entertainment and plenty of eats, apple-themed and otherwise. Enjoy signature events like an apple pie contest and a 5K. dovernh.org

Highlights of this annual festival and local favorite include a giant pumpkin weigh-in contest, a scarecrow-making tent and a midway full of carnival rides. milfordpumpkinfestival.org

This Granite State Halloween classic is back for another year of scares and haunts. Winner of “The Great Halloween Fright Fight of 2014” on ABC, this frightful walk is one of the most creative and unique attractions in the world. Experience one-of-a-kind props, set designs, a real headless horseman, hundreds of lighted pumpkins, and monsters looming over the crowd, some as tall as 42 feet. The attention to detail is apparent if you do the nighttime haunt, and even if you walk through during the day with no actors. Stop by and see what all the talk is about, and enter if you dare. hauntedoverload.com

Held at Cisco Brewers in Portsmouth, this festival includes 5-ounce souvenir sampler cups, beer samples, live music and entertainment. It is also a special fundraiser for the Prescott Park Arts Festival in partnership with Master Brewers Association of Americas and WHEB’s “The Morning Buzz.” prescottpark.org

This new event is a part of the weekend fall festival and pig roast. Rubber ducks will be dropped from the chairlift, aimed at targets on Mount Sunapee. The afternoon is full of fun and prizes, including a chance to win $1 million. Proceeds benefit the Boys & Girls Clubs of Central New Hampshire. nhduckdrop.com

With festivities including pumpkin-painting, water-balloon-launching and a stein-carry and keg-roll relay — plus, of course, plenty of beer and brats — this Granite State German fest may be the granddaddy of them all. It’s the perfect opportunity to reconnect with old friends and make new ones during the weekend’s full lineup of activities and entertainment. loonmtn.com

The town of Jackson has always gone all out with their fall festivities — a monthlong Pumpkin People challenge, a two-week All Things Pumpkin fest — but this event is the one you can’t miss. More than a dozen teams will bring their gourd-carving prowess to this contest, so come ready to watch the artists’ two days of carving and to peep the finished products at the end of the weekend. jacksonnh.com

All aboard the “Pumpkin Patch Express.” Passengers are invited to get off the train and participate in pumpkin patch activities. Each child will be able to pick out his or her own pumpkin and enjoy games like the corn cob toss. Barrel car rides are included and costumes are encouraged. conwayscenic.com

Howie Mandel has remained a constant force in show business for more than 30 years. Mandel currently serves as executive producer and host of the game show “Deal or No Deal,” which returned with exciting, brand-new episodes in December 2018 on CNBC. Mandel has served as a judge for a decade on NBC’s hit summer talent competition series, “America’s Got Talent,” which premieres its 14th season in May. Mandel’s versatile career has encompassed virtually all aspects of the entertainment spectrum, including television, film and stage, and he continues to perform as many as 200 stand-up comedy shows each year throughout the U.S. and Canada. palacetheatre.org

Madison is turning itself into a Halloween town that has the vibes of the 1998 classic “Halloweentown.” Two hundred volunteers are coming together for the 12th annual event with the desire to offer kids the opportunity to enjoy walking around a “neighborhood” and visit houses trick-or-treat-style. There will also be a kid carnival, petting farm, food court, hot-air balloon rides, entertainment and the incredible “trick-or-treat trail.” halloweentownnh.thelaurafoundation.org

The world-famous, 18-member ensemble will be playing many of the original Miller arrangements both from the civilian band and the AAFB libraries. Additionally, it will also be playing some more modern selections arranged and performed in the Miller style and sound. tupelomusichall.com

Start practicing your monster mash because a great annual Halloween event is back. The Port City’s cult-favorite event turns 27 this year, and the costumes (and camaraderie) promise to be bigger and better than ever. Everyone is invited to dress up and meet at Peirce Island for this celebration of community and creativity. portsmouthnhhalloweenparade.org

Categories: Fall and Foliage, Family-friendly things to do, Things to Do