While it might sound sacrilegious to some Granite State winter enthusiasts, man does not live by skiing alone. Same for every woman and child. Because although skiing and New Hampshire is a match made in heaven for many, it’s not the “be all, end all” for everyone. Even most skiers and snowboarders understand that.

Take me, for example. I’m a New Hampshire boy through and through. I can’t think of anything I’d rather be doing after Thanksgiving than hitting the slopes, carving big ol’ turns on fresh-groomed corduroy, or maybe sneaking into the glades after a good powder dump. But I’m also a husband and a father, and suffice to say, not everyone in my clan shares my single-minded obsession. Do they love to ski? You bet. Do they want to mix it up a bit? Absolutely.

So, to keep the peace, my wife and I rely on another time-honored adage: “Variety is the spice of life.” We make a concerted effort to enjoy all the activities that the winter in New Hampshire offers. That mindset can be a life-saver (or at least a trip-saver), given the vagaries of the weather.

We only have one rule: Everyone needs to get outside.

With modern, properly fitted gear, snowshoeing can feel as natural as walking. That makes this sub-freezing pastime one of the oldest, and one of the most popular, winter activities for fans of the great outdoors. It also means you can do it almost anywhere there’s a well-maintained trail. Sample state parcels ranging from Monadnock State Park in Jaffrey to Bear Brook State Park in Allenstown, or federal lands in the White Mountain National Forest.

Prefer something more structured, like a tour or workshop? Check out the offerings of the Appalachian Mountain Club, which runs programs out of the Highland Center on Route 302 in Crawford Notch, and the Joe Dodge Lodge in Pinkham Notch, or Outdoor ESCAPES New Hampshire in Freedom.

Admittedly, I’m a fan of activities powered by nature. I prefer sailboats to power boats, windsurfers to jet skis, mountain bikes to motorcycles. That’s just the way I’m wired (plus the fact that I’m not mechanically inclined in the least). I was reluctant to try snowmobiling. Then a friend brought a couple of sleds along during a “boys weekend” ski outing. As soon as I hit the gas, I was hooked. These machines are remarkably agile and responsive. And fast.

The New Hampshire Snowmobile Association maintains roughly 7,000 miles of dedicated trail throughout the state, so the variety is quite impressive. There’s also plenty of variety for tours and rentals, such as Dalton Mountain Motorsports (also in Lancaster) or Jericho Outdoors in Berlin, NorthEast Snowmobile or White MT ATV Rental in Gorham, DirtVenture ATV Rentals or Out Back Kayak in Lincoln, or Bear Rock Adventures or Trailside Rentals in Pittsburg.

One of the coolest, and potentially coldest, winter activities in the north country, zip lining is about as close as most of us will ever come to actually flying. At Bretton Woods, a three-hour canopy tour offers a unique perspective on the wilds of the White Mountains. The thrilling treetop experience features a series of nine zip lines and glorious, sweeping views of Mount Washington and the Presidential Range. The longest zip is roughly 830 feet, and more than 165 feet off the forest floor. Not to be outdone, Alpine Adventures to the south offers three zip line options year-round, including the original Tree Top Canopy Tour, the SkyRider and the Super SkyRider Zipline (with zip lines longer than 1,600 feet, and speeds of up to 60 miles an hour).

This ancient pastime combines all the excitement of snowmobiling, without the throttle-twisting horsepower or fumes and cacophony created by internal combustion. Generally speaking, sled dogs are unusually good natured, which the kids love. But these dogs don’t want to sit still for long. And the unmitigated joy they exude when “working,” running along snow-covered trails and through open fields, is absolutely infectious. “It’s just an amazing feeling of cruising down the trail, and it’s only you and the dogs,” said Lily Stewart, a dog-sled racer who attended the University of New Hampshire. “At first, it’s a little nerve-wracking, because it is just you and the dogs, but then you get into this zone where nothing else really exists.” 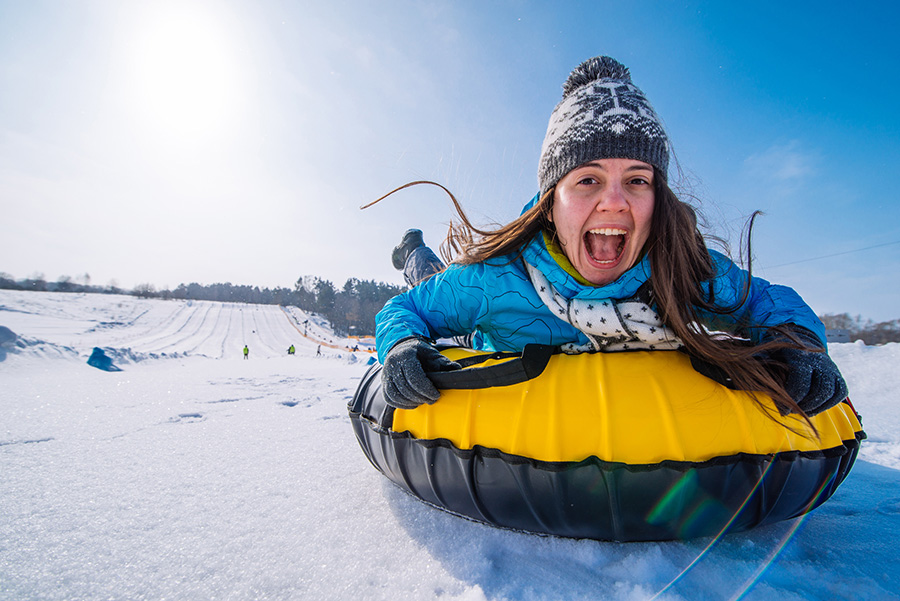 Whether you’re 7 or 70, whether you’re riding solo or racing your best buddies, speeding down a track on an inner tube will instantly connect you with your inner child. Seriously, what could possibly be better? You don’t need any particular skill or special equipment — just warm clothing, a tube, a long patch of snow and gravity. The big tubes are as comfortable as an over-stuffed Barcalounger, and the tracks are buffed super smooth to keep any drag to a minimum. Many areas offer surface lifts to shuttle you back to the top of the hill, and night lights allow you, and friends and family, to extend your day.

Traditional rock climbing routes in New Hampshire are popular in part because they’re predictable. Ice flows, conversely, promise an ever-changing canvas on which climbers can test their skills. New Hampshire boasts a number of spectacular locations, including Frankenstein Cliff and Mount Willard in Crawford Notch, Champney Falls off the Kancamagus Highway and Huntington Ravine on Mount Washington, where climbers can set their ice axes and crampons. The biggest caveat is that ice climbing can be a high-consequence activity, so working with a guide is the best option for beginners to intermediates. “We’re able to take people of all abilities climbing both on rock and ice,” said Bradley White, co-owner of International Mountain Climbing School. “The steeper the ice, the more upper body fitness is required, but everybody can climb something and be challenged.” 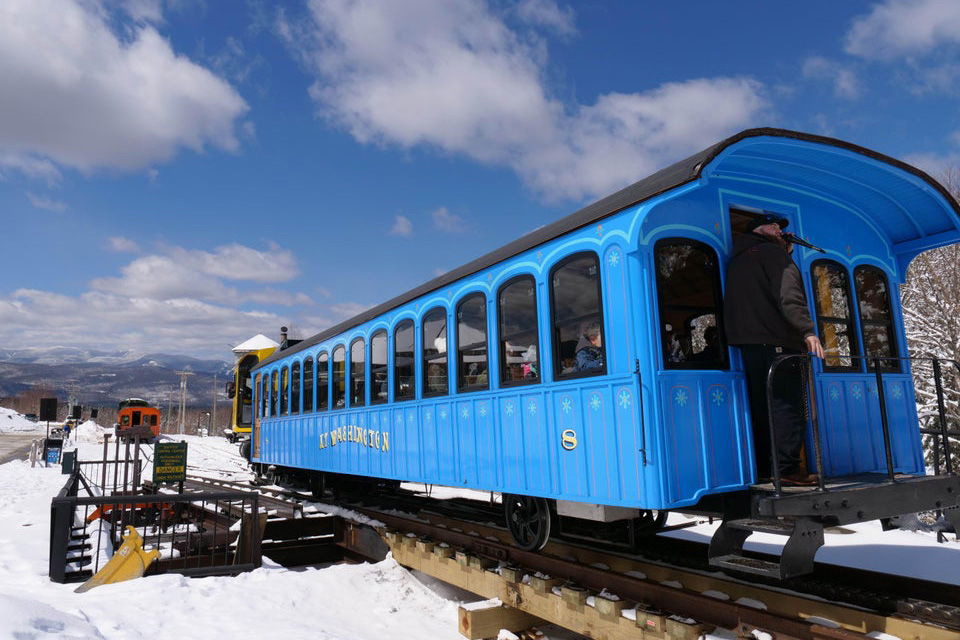 On the opposite side of The Rockpile, the legendary Cog Railway chugs halfway up the mountain’s western flank (winter rides do not go to the summit). The world’s first mountain-climbing cog railway is not an exhilarating ride, per se, given the slow, steep approach. But the stunning views and sublime sense of history are unparalleled. And kids will love the chance to stand in the coach and lean out way over their toes, thanks to the sheer incline (with grades exceeding 35%), much like a ski jumper in mid-flight. The small museum at the Marshfield Base Station is also worth a visit, with fascinating displays such as the Devil’s Shingles slideboard (which early daredevils used to race down at breakneck speeds) and Old Peppersass, the first locomotive to climb The Rockpile on July 3, 1869. 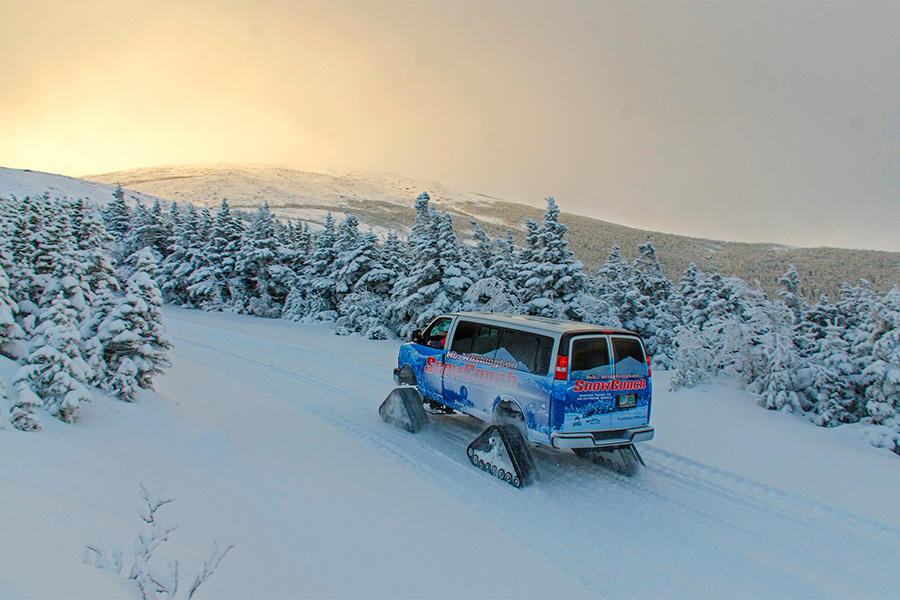 The 7.6-mile Mount Washington Auto Road, first opened in 1861 and winding 4,200 feet to the summit of the Northeast’s tallest peak at 6,288 feet, has a moth-to-the-light pull for visitors. Mount Washington is often tagged with the reputation of “the word’s worst weather,” thanks to the subarctic conditions and the 231-mile-an-hour wind gusts recorded in April 1934. Those winds have scrubbed the granite dome above treeline, giving the landmark its affectionate nickname, “The Rockpile.” But being above treeline also provides remarkable views. (Imagine looking down on Wildcat Ski Area!) Be sure to bring your camera or smartphone. Advanced reservations for the 1½-hour tours are highly recommended. The Mount Washington Observatory also offers longer snowcat day trips and overnight “EduTrips” with a dedicated trip leader and a tour of the weather station. 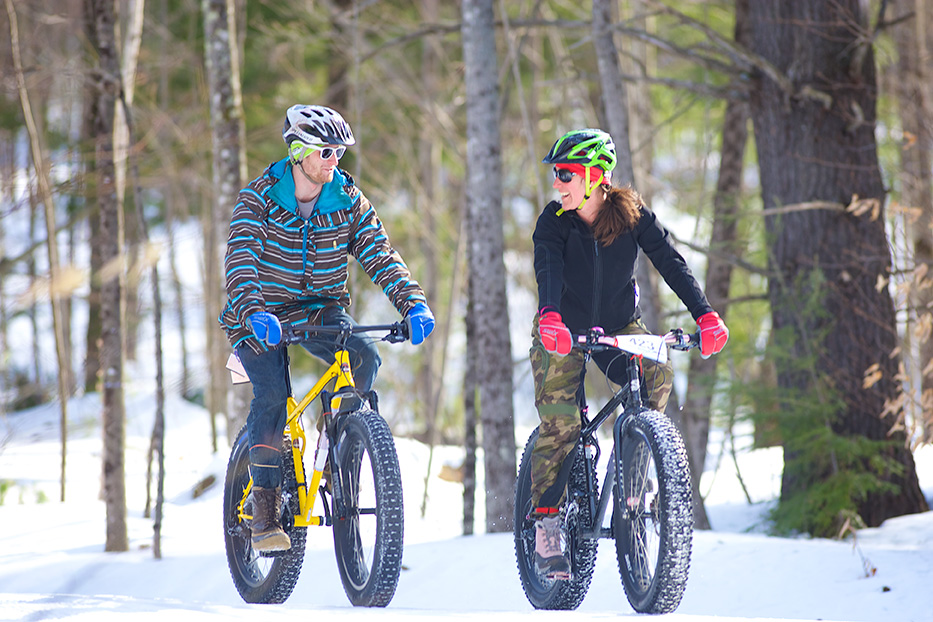 These bikes, with their low-pressure balloon-like tires, are an absolute hoot in the snow. They’ll even roll confidently over ice, provided your tires are equipped with studs. For newcomers, the best options are machined-groomed cross-country ski routes, like you’ll find at Great Glen Trails and Outdoor Center in Pinkham Notch (unfortunately, no riding is allowed either up or down the Mount Washington Auto Road except for the Ski, Shoe & Fatbike to the Clouds event held in March) or the Mount Washington Valley Ski Touring Center in Intervale. However, these bikes are incredibly adaptable, and don’t require manicured terrain, making a host of trails fair game. Many shops offer rentals and maps of local trail networks. And the New England Mountain Bike Association has several local chapters in New Hampshire that can also provide local information and rides.

There was a time when I thought that a horse-drawn sleigh ride through the snow, snuggled beside my sweetheart, was the epitome of romance. Actually, I still do! But once I saw how much our young daughters relished these outings, I was convinced it was one of the ultimate family winter activities. These rides are a blast day or night, but I’m especially partial to going out after sundown, under a constellation of stars.

Winter sports and activities encourage us to embrace the cold and snow. So what could be better than sharing those experiences with a host of other folks at the end of the day? It’s difficult to find a better sense of camaraderie than an aprés ski get-together with friends and family.

The Cave at Bretton Woods

Delaney’s Hole in the Wall