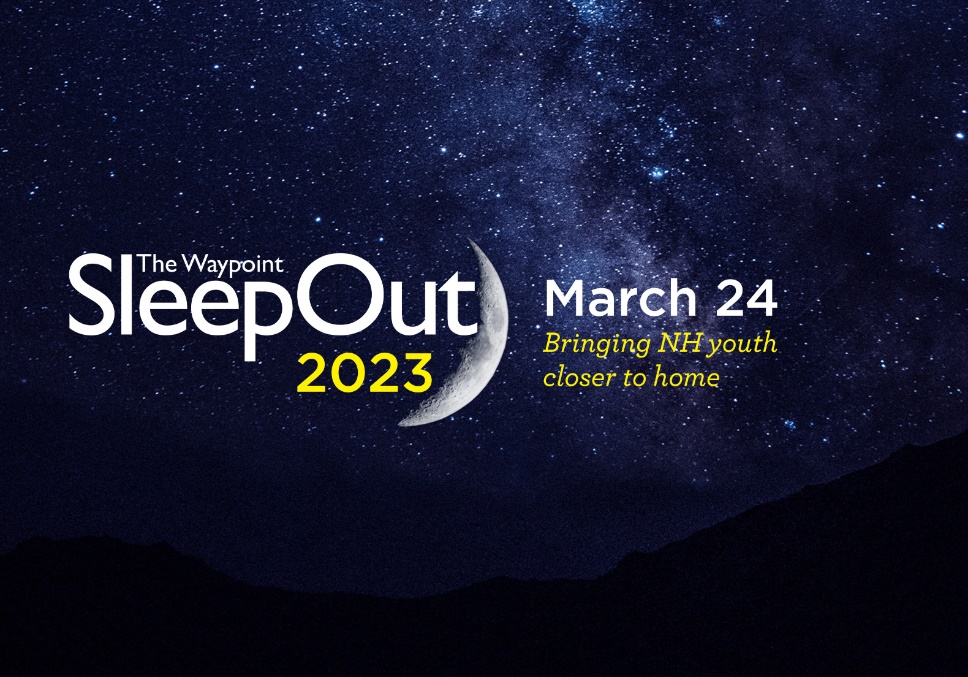 If Kat Strange and her colleagues succeed at their jobs, they’ll no longer have jobs. As Strange sees it, that’s the best-case scenario. “Any social service agency, in general, you’re in the business to put yourself out of business,” Strange says. “We’re not just putting bandages on problems — we’re trying to solve the problems.”

The 25-year-veteran director of communications at Waypoint — the New Hampshire non-profit, formerly known as Child and Family Services, that works to aid Granite State youth — hopes initiatives like their ninth-annual SleepOut render her job obsolete. SleepOut invites Granite Staters to spend one night under the stars as means of raising both funds and awareness for youth homelessness. This year’s SleepOut takes place on Friday, March 24. In-person “sleepers” will spend the night at either of Waypoint’s two designated locations (3 Wallace St., Rochester, and 464 Chestnut St., Manchester), while hybrid sleepers — an idea conceived of when the COVID-19 pandemic threatened to shut down the annual event in 2020 — may sleep at the location of their choice. All participants create a SleepOut fundraising page to amass donation money, much like a marathon, with the goal of raising $1,000. The 173-year-old non-profit set this year’s overall fundraising goal at $450,000, all of which goes toward financing Waypoint’s many comprehensive youth homelessness services. “It’s really heart-wrenching and heartwarming,” Strange says. “It’s one thing for me to explain it, but it doesn’t do it justice. You have to put yourself out there and feel that discomfort for that period of time with your comrades, with people who are also in it with you, all with the intention of wanting to make a difference. They’re all wanting to raise funds to better serve people who’re struggling.” 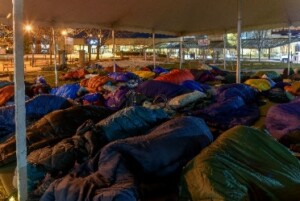 Sleepers hunkered down during Waypoint SleepOut 2019 in Manchester. Photo by Tom Kallechey

SleepOut began in 2015, the brainchild of a Concord volunteer who heard of a similar event located in Vermont. That first SleepOut took place in downtown Manchester next to the Center of New Hampshire Expo, raising $133,000 with fewer than 100 participants. In the 30 years prior to SleepOut, Waypoint held annual benefit concerts — which became increasingly obsolete and less lucrative over time. Strange remembers feeling the pressure to offer a new event that would reinvigorate the community’s participation. “We were a little hesitant,” Strange says, “because we really didn’t want to mock or mimic homelessness. We knew that one night out in the cold doesn’t come close to the homeless experience. We eventually decided it could be a really good way to bring the community together in solidarity with people who experience homelessness, and to heighten your senses for that one night about the plight of those who endure that uncomfortable and fearful experience.”

Strange finds the following morning’s reflection period to be the most impactful part of the experience. Gathering indoors as the sun peaks over the horizon, participants discuss all that they felt, heard and saw, pinpointing the evening’s nascent effects on their preconceived notions about homelessness. The vulnerability of laying prone in public, the sights and sounds of a pre-dawn metropolis and where to relieve oneself all become very real concerns while spending a night outside. As Strange says, it’s one thing to consider homelessness — and a whole other to spend the night exposed to the elements, fully empathizing. “The event has always been great at not just raising awareness that the problem exists, but raising consciousness about what it means and elevating that,” she says. “We can get up and go home the next day. We know we have homes to go to, and we’re grateful for that. You try to imagine what it would be like if you didn’t. It’s hard to fathom what true homelessness is like for someone.” 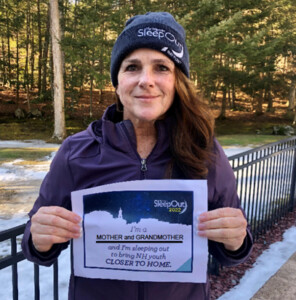 Kim Wood of Velcro celebrating her completion of SleepOut 2022.

Waypoint expanded their services in 2022 to further combat youth homelessness. Two new youth resource centers (on Wallace Street in Rochester and Hanover Street in Manchester) provide drop-in support for adolescents looking to take showers, do laundry, receive food or clothing, utilize computers, access case management services, get connected to addiction treatment, mental health counseling and more. Strange says that resource center staff work to honor wishes and aid youth in reaching their goals; that can mean anything from helping obtain a driver’s license to aiding school and job applications and nearly everything in between. Waypoint also opened the first overnight emergency shelter for young people in the state last October, also on Hanover Street in Manchester, providing low-barrier access to 14 emergency beds. These facilities come at the heels of Waypoint’s already-extensive youth services, including a runaway and homeless youth program, a street outreach team that scouts communities for homeless young people, a rapid rehousing program and a transitional living program that provide housing for youth in need. All the money raised from SleepOut 2023 will go toward these initiatives.

“Our hope is that we’re casting a wider safety net,” Strange says. “All these efforts in tandem with our communities across the state will help us get another step closer to actually ending youth homelessness. We’re trying to instill the kind of programs and services that contribute to long-term stability and truly help people change their life course and prevent homelessness in the first place. It’s a tall order, but it’s made easier when the people helping you understand it and feel it. When you come to the event to experience that one night out, I think it’ll do exactly that. It’ll help raise those empathies a little bit more…raise those understandings a little bit more.”

Register for SleepOut 2023 here, and read more about Waypoint’s mission and services on their website, waypointnh.org. 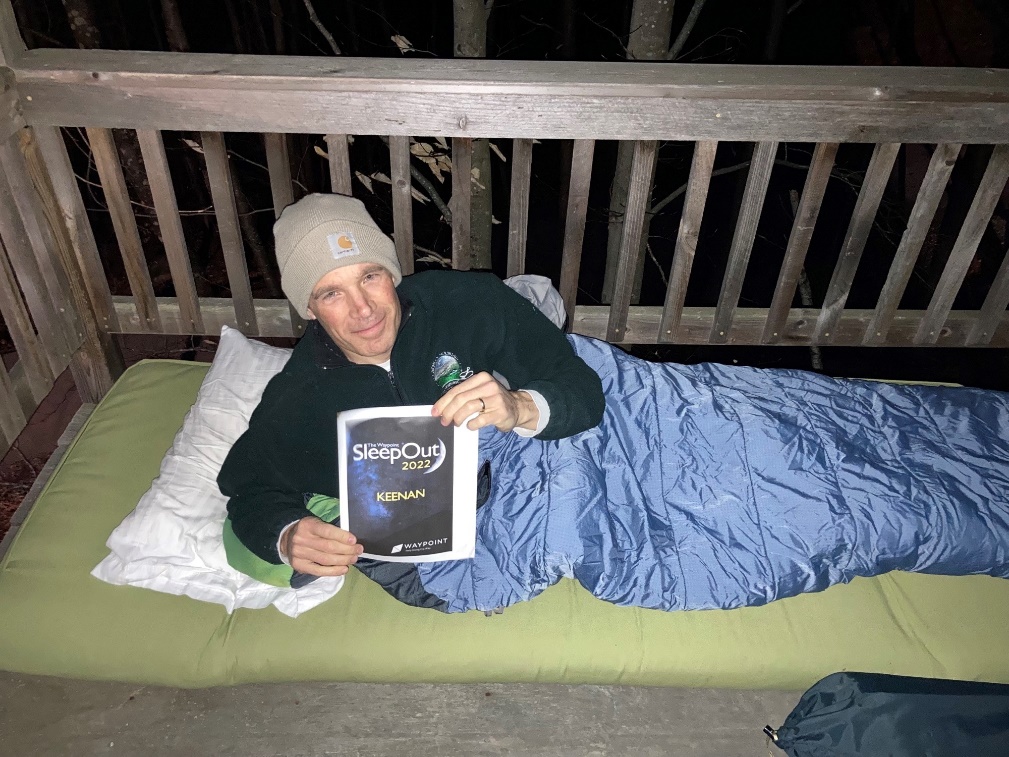 Rob Dapice, executive director and CEO of NH Housing and a Waypoint trustee, spending the night in his sleeping bag, SleepOut 2022.

Categories: Cause of the Month