One late-2000s Utah winter, Brent Christensen noticed his neighbors running their sprinkler nonstop to create a massive ice mound. With six kids becoming increasingly stir-crazy during the frigid Utah winter, Christensen seized the idea with vigor, thinking it a fun cold-weather activity to get his family outside. He built a framework, sprayed it with water and let it freeze to create an ice structure. The next winter, he constructed an entire ice fort. By 2011, Christensen was making Ice Castles — massive frozen structures incandescing with color that Oprah Daily calls “twinkling and sense defying and straight out of fairy tales.”

“It was just for playing with the kids in the yard,” Christensen said, “but once that happened and I built that one — it was small, by today’s standards — I was able to build it taller than my house. We had a lot of people come by to check it out and I said, ‘Well maybe it’d be cool if I could build something like this for the public, so people can actually go through it.’ And it went from there.” 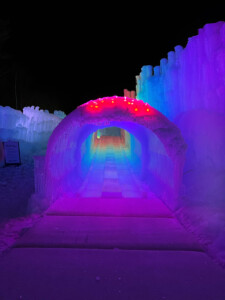 Today, Christensen’s Ice Castles enchant audiences in five states — Minnesota, Utah, New York, Wisconsin and right here in New Hampshire, on Clark Farm Road in North Woodstock. They first opened in the Granite State at Loon Mountain in 2015, moving to Hobo Railroad in Lincoln in 2016 and then purchasing their current North Woodstock property four years after that, in 2020. After more than a decade of running the Ice Castles business, Christensen continues to illuminate the magic of winter. “One thing that I want everyone to take away is that even in mid-winter — when we’re all tired of winter — there’s still a lot of beauty out there,” Christensen says. “The beauty of our castles is natural. It’s Mother Nature’s fingerprint on it. If people come away thinking, ‘Wow — winter is awesome!’ then we’re happy.”

Christensen’s team builds the castles by growing thousands of icicles overnight, sticking them into the ground, spraying them with water and topping them off with more icicles, over and over and over again. Ice Castles’ workers can add up to 3 feet of vertical ice to the in-process structures a day. Each location takes around two dozen workers on the “build crew” and 10,000 total labor hours to construct. “If you put a wire or a string or even a human hair exposed outside and water is spraying and dripping on it, that’ll collect, and if the temperature’s cold enough it’ll fuse to it,” Christensen says. “You could put out a string and the next day it could be two or three inches thick with ice. That’s the concept of how we build them.” 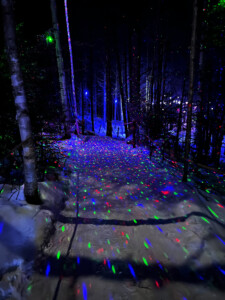 Each Ice Castles location is built similarly but offers its own unique features. North Woodstock’s venue offers a tubing hill, sleigh rides, a “Mystic Forest Night Walk” and a brand-new “Polar Pub” serving alcoholic beverages to of-age patrons. “If you live in the New Hampshire area and you want to go to the Ice Castles, you’re in luck, because you get some bonus features,” Christensen says. “It’s a business and it’s a lot of work, but there’s a huge element of playfulness and exploration in it. We get to try something new every year — the designs are always different.”

While Christensen wants people to appreciate the architecture of his frozen edifices, he also simply aims to provide a vessel for cherished moments. “Most people come to the experience with somebody,” Christensen says. “They come with a spouse or a significant other or a group of friends or family. It’s just an opportunity for good memories.”

North Woodstock’s Ice Castles officially opens Thursday, January 19, 2023 although they hope to open sooner if weather allows. Christensen encourages patrons to buy tickets online (as weekends and holidays get busy) but they can also be purchased day-of (space permitting) at the venue. Tickets are $20 to $29 for adults and $15 to $22 for children and can be purchased at icecastles.com.