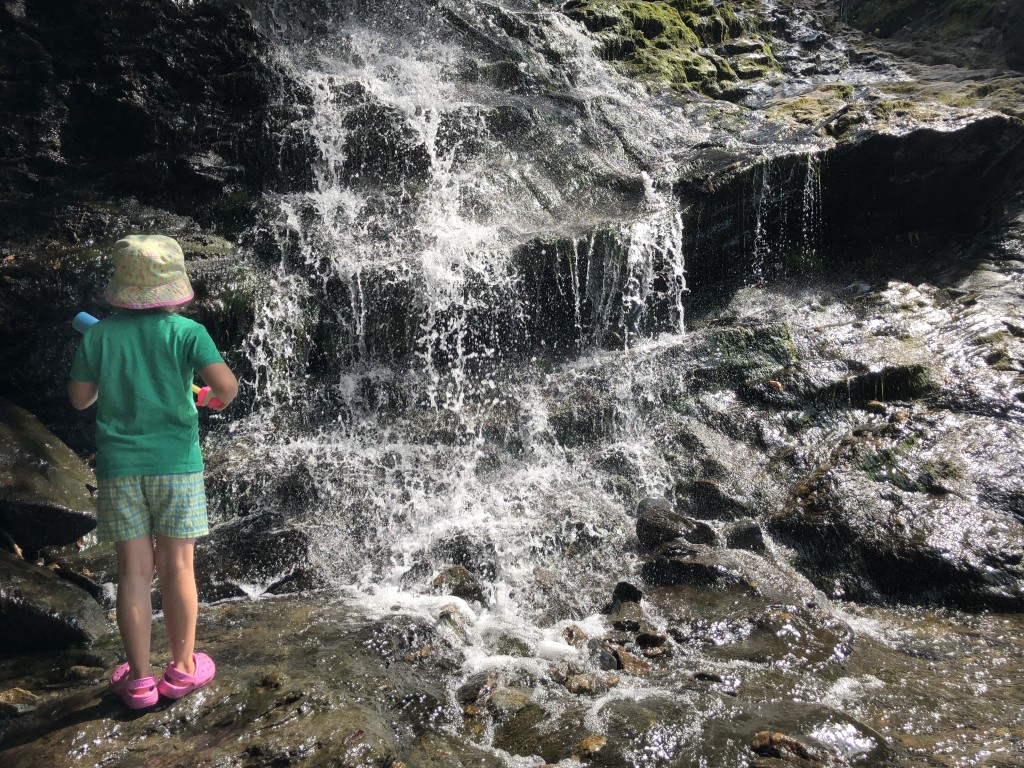 The author’s daughter at Beaver Brook Falls in Colebrook

My 7-year-old daughter is crawling around on the marble floor of the State House, looking for fossils. While this is a sentence one doesn’t usually utter, in our family, such experiences tend to be fairly common. We prefer our adventuring to be a bit more off the beaten path, slightly less touristy and usually pretty dirty. (Or at least dusty, as is the case with the Capitol.)

With summer upon us, after the last couple challenging years, New Hampshire will once again become a hot bed of recreation fun for families from across the country. What follows is a guide to the weird and to the unusual — some suggestions for summer activities that may require a bit more planning, but will result in, perhaps, a more unique family adventure. Something different. Something less crowded. Something inexpensive.

And maybe some fossils as well!

Kids love rocks. Kids love big rocks even more. If those rocks are shaped like animals, well, I think you see where we’re going with this.

Over the course of the last year, my daughter and I have tracked down dozens of famous rocks and boulders across the state — nearly all on public land, and most with little to no traffic. We wrote a field guide about it called “NH Rocks That Rock!”

You may already know about the Madison Boulder, but have you visited Buffalo Rock in Nottingcook Forest in Bow or Dog Rock at Tower Hill Pond in Candia or even Sheep Rock along the Heads Pond Rail Trail in Hooksett?

Our suggestion: Check out the brand new All Persons Trail at Cedar Swamp Preserve in Manchester. Family-friendly with plenty of interesting features, this little-known gem on the city’s west side has much to offer. And while you’re there, see if you can find T-Rex Rock!

There’s nothing wrong with spending time at New Hampshire’s many oceanside beaches, but if you want your watery summer experience to be a little less shoulder to shoulder, a waterfall might be what you’re looking for.

When we pulled into the parking area near Beaver Brook Falls in Colebrook, my daughter charged right up to the magnificent 35-foot falls, alone! Though right off the road, and with plenty of picnic areas and even a few hiking trails, the crowds are seldom in a rush to go north of the notches. And because Beaver Brooks Falls is technically a wayside as opposed to a state park, there’s no fee to enter and explore.

There are many other waterfall options, including Arethusa Falls in Crawford Notch, which at 175 feet is the highest in the state. Diana’s Baths in North Conway or even the Basin in Franconia Notch are rightly famous, but be prepared to share those tourist spots with, well, tourists.

“Daddy, look at this,” my daughter said from under the Beaver Brook Falls. “I can touch the water.” There’s nothing like a picnic under a waterfall. 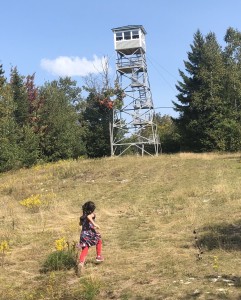 Overlooking Lake Winnipesauke on a pitch-perfect, blue-sky summer day, my daughter became a Junior Fire Warden. She hasn’t been the same since, taking this appointment seriously, warning other hikers on the trails, keeping a sharp eye out for the curling smoke of a forest fire.

Technically, there’s no such position, but during a visit to one of our favorite active fire towers, Red Hill in Moultonborough, Fire Warden Kelley Brown pinned a badge on the shirt of my eager daughter, handed her a packet of stickers and the deed was done.

Fire wardens are like that, and if you time your hike properly, your little one might get pinned as well. There are 15 active fire towers in the state, and several of them (Cardigan, Kearsarge, for example) are long, exposed hikes. But many are little visited drive-ups or short woods walks. Beside Red Hill, we recommend Warner Hill in Derry, Federal Hill in Milford or Milan Hill way up in Milan. If you want to really get away from the crowds, drive the eight miles of logging roads to hike a mile to Megalloway Fire Tower just a few miles from the Canadian Border.

But be careful, once your kids get a taste for fire spotting, a simple little visit might become a lifelong obsession.

Want to travel to every corner of the state, have adventures and be nearly guaranteed to be on your own? Try Geocaching or Little Free Library book swapping. These two pastimes are taking off around the country and in New Hampshire, hundreds of treasure spots and book libraries are popping up.

Geocaching is an outdoors activity where participants use GPS to hide and seek out containers called geocaches filled with toys, gifts or tokens. Little Free Libraries are stand-up book receptacles placed in front of homes or businesses full of books to take and trade. My daughter is rarely happier than when a geocache can be found at the same location a Little Free Library.

Both of these activities have online apps or websites where you can track those closest to you. (littlefreelibrary.org is one, and they have an app.) Do you live in Portsmouth, for example? There are 15 registered Little Free Libraries you can visit. In Littleton, you can explore 17 geocaches in the surrounding trails and woods.

Last fall, my daughter and I packed the car full of snacks, tiny toys and a box of books and spent the day going from cache to cache and library to library in just Manchester. Whole vacations can be planned around these activities, and national organizers hold meet-ups and conferences around the world.

But for now, wherever you are, we promise there’s a cache or little library right around the corner from you. 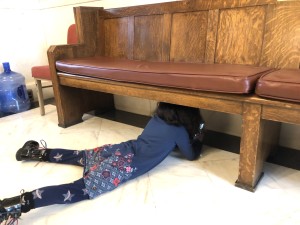 Back to the fossils. Remember that moment in “Raiders of the Lost Ark” where Indiana Jones reverts cleanly back into his archeologist archetype and is standing at the edge of his dig site as his friends work below — completely oblivious to the fact that he’s in the midst of his enemies and is in danger?

That moment is about discovery, and it supersedes all else. It’s the moment of pure Indiana Jones. That shot is the best of the film because we are all children there along with him — no war or theft. Not even drama. Just … awe.

This image came to me recently during a field trip to the State House in Concord as my daughter crawled around on the marble floor, under a bench. She wasn’t misbehaving or having a tantrum. She was exploring.

And like that famous character from a movie she has not yet seen, she was doing archeology. She was searching for fossils.

We had received an invite from a state representative friend whose husband was a geologist and who thought my daughter might be interested in seeing the fossils embedded in the marble in the State House floor.

Who knew? We certainly did not.

So, after some negotiations, we found ourselves being shown around the building by a wonderful tour guide from the visitor center. Along the way, we ran into executive councilors, and my daughter got to sit in the Governor’s chair in his chamber. We checked out both chambers, along with the underground cafeteria and the long tunnel that connects the state house to the law makers’ offices. All heady, important, sometimes solemn stuff.

But the fossils! I could see the fire in her eyes each time she found one, like a switch being flicked on. And you can too. For the most unique and strange summer field trip you are likely to have, pack your family into the car, drive to Concord, walk into the State House visitor center and politely ask them to show you the fossils.

New Hampshire is packed with odd sights, interesting history and off-the-beaten path adventures, and sometimes the search is part of the fun. Just don’t be afraid to crawl around under a bench sometimes. The fossils are there, waiting for you to discover them.

Journalist, author and speaker Dan Szczesny has written several books of travel memoir, which you can learn about at danszczesny.com.

Categories: Family-friendly things to do, Guide to Summer, Summer Adventure