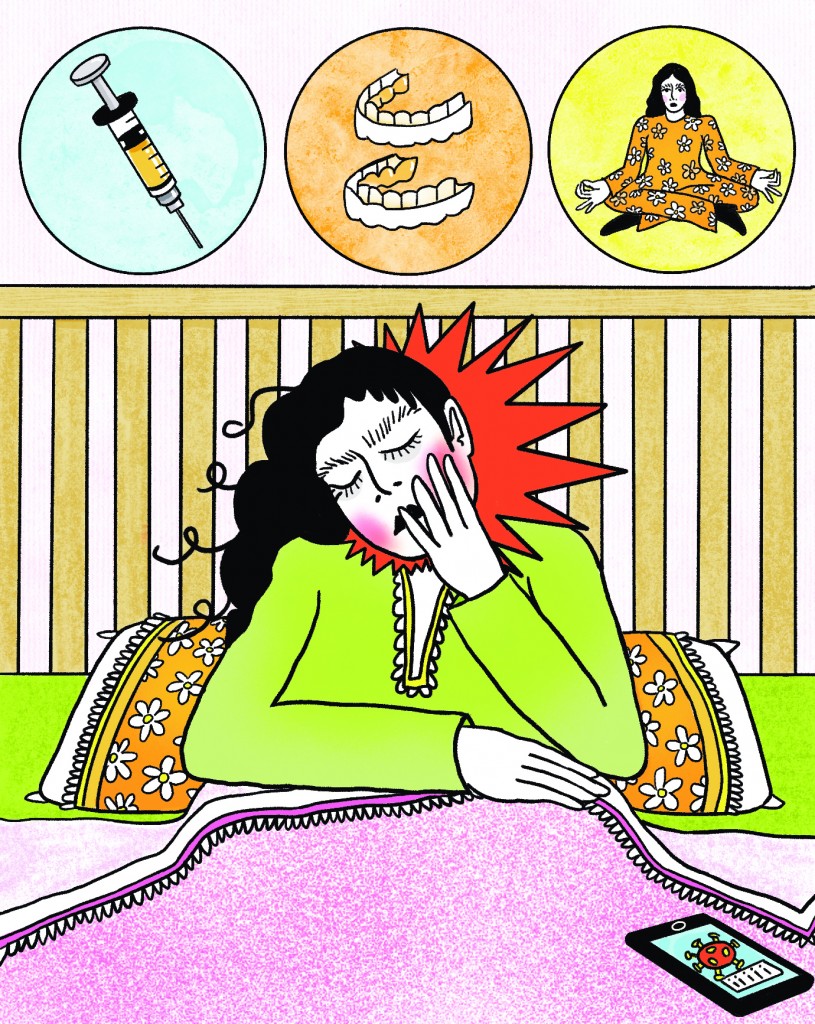 Surveys show that the majority of Americans have felt increasingly stressed during the past year or so. No surprise there. Now, the consequences of chronic stress are beginning to surface as people seek help for an array of mental and physical ailments that stress can cause or exacerbate, from insomnia and depression to heart disease.

Indeed, even our pearly whites have suffered as they’ve literally borne the brunt of life in modern times. Delayed dental care due to the pandemic created its own set of problems, but many dentists have also seen a spike in temporomandibular joint (TMJ) disorder. While the exact cause of TMJ disorder can be difficult to identify, emotional distress is considered a contributing factor, at a minimum.

We each have a TMJ, or jaw joint, in front of each ear where the lower jaw connects to the skull. A range of circumstances, including injury, genetics and teeth clenching or grinding, can cause the TMJ to dysfunction and lead to symptoms such as jaw soreness, headaches, earaches, clicking that accompanies jaw movement and a locked jaw. Habitual clenching or grinding can also chip or crack teeth and can even cause the gums to recede.

Earlier this year, the American Dental Association reported that more than 70% of surveyed dentists said they have seen an increase of teeth grinding and clenching among patients, and more than 60% of dentists said they’ve seen a rise in TMJ disorder symptoms in their patients.

“I see it a lot, even in younger people,” says Keith Levesque, D.M.D., of Levesque Dentistry in Nashua. Most often, he says, TMJ disorder involves jaw muscles that are overworked from clenching or grinding habits that many people do not realize they have.

David Bloom, D.M.D., of New England Dental Arts in Salem, says that these days, “almost everyone over the age of 15” grinds or clenches their teeth. He estimates that while “30 years ago, maybe 20% of the patients I saw had real [TMJ-related] issues … now close to 100% of the people are [clenching and grinding] at an extreme level.”

Bloom says, however, that the surge shouldn’t be chalked up solely to the tough year-plus that we’ve had; he believes tech-driven lifestyles have helped drive up incidence rates over time. The constant stream of alerts, messages and distractions that most people are exposed to all day, every day, he says, adds up to digital overload. Then the pandemic came along and “added another layer” to our mental distress. “COVID has increased people’s stress and made them more anxious,” Bloom says. “The clenching and grinding is a stress reliever for the brain.”

There is no cure for TMJ disorder, but there are treatments to manage it, ranging from self-help, such as meditation, and checking in with yourself to see if you’re unconsciously clenching your teeth, to night-guard use, orthodontics and Botox injections that temporarily paralyze the jaw muscles.

TMJ disorder can be just a passing problem, Levesque says, that comes and goes in tandem with a problem or worry in your life. “As things get better,” he says, “your jaw gets better.” But in many cases, long-term treatment is necessary. Night guards, for example, which are also known as bite splints or occlusal splints, are one of the most common therapies for TMJ disorder, and often must be worn indefinitely. The good news is, a properly made night guard can alleviate symptoms, protect teeth and improve jaw alignment — and it needn’t be bulky or uncomfortable. Unlike the sports mouthguards you sometimes see protruding from the mouths of athletes, a typical TMJ-related mouthguard is sleek and streamlined. In fact, most people who grow accustomed to wearing a night guard for TMJ disorder find that they can’t sleep without it, Levesque says.

Whatever the particulars of the chosen treatment for TMJ disorder, a key part of the ultimate goal is to get the muscles associated with the TMJ to relax. Here’s hoping that those of us who clench and grind will also loosen up emotionally as we rest better knowing that any stress that comes our way doesn’t have to take a toll on our teeth.

Ill-designed mouthguards might cover the surface of the teeth to provide some protection, “but you don’t always understand [their] influence on the TMJ and the muscles,” says David Bloom, D.M.D., of New England Dental Arts. For example, unlike well-made custom night guards, night guards sold in stores can be unstable and soft, which can invite chewing and cause tension in the TMJ and surrounding muscles when the goal is to get the muscles to relax.

Typically, custom night guards are not cheap — they often cost hundreds of dollars and are not always covered by insurance — but if you want the safest, most accurate fit and your best shot at relief from TMJ-disorder symptoms, experts say choosing custom is the way to go. Not only can a good night guard alleviate symptoms, it can also prevent the need for costly dental treatments down the line.

The post The Pandemic and the Rise in TMJ appeared first on New Hampshire Magazine.