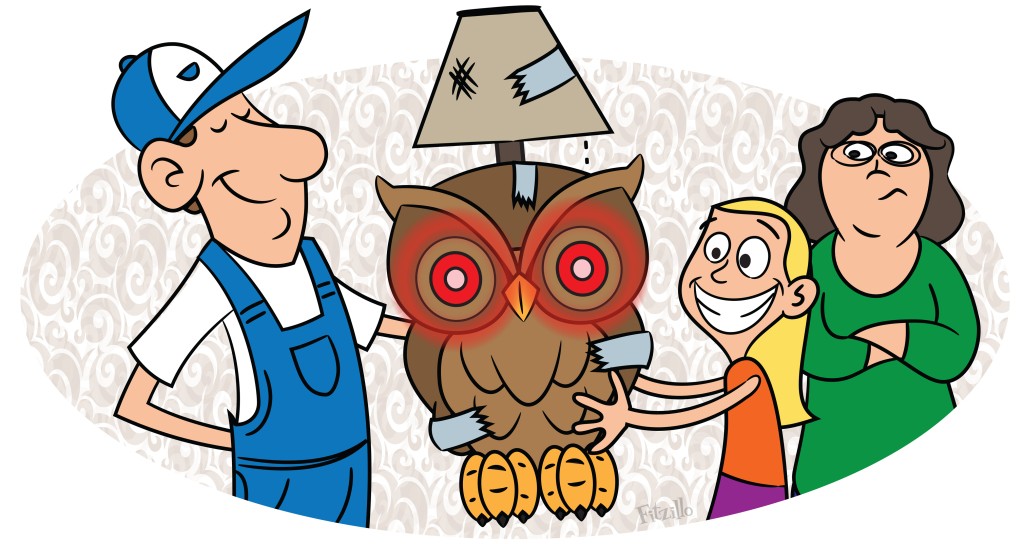 I’m not handy. Luckily, my husband is. When he put new guts in an old lamp (a large ceramic owl) for our daughter, she was amazed. That lamp, from a local antique shop, sat for months in the dark. Now its owl eyes are alight. Oh, joy.

Sometimes even the handiest of handy-persons overextends, resulting in what some call an “Oh-shoot.” (Others describe it more colorfully.) Like the time Hub nailed his hand to the crossbeam with the power nailer. Or when replacing fascia on the eaves, he threaded a corner board through the rungs of the ladder, effectively nailing the ladder to the house. Or the time Hub and his brother, Nub, installed a pump at camp to pump water from the pond.

“You installed it backwards,” I reminded the brothers on a trip down memory lane.

Nub poured buckets of water into the pump to prime it. But the prime never took. As fast as Nub poured the water in, that’s how fast (unbeknownst to Hub and Nub) it gushed out the other end. Oh-shoot.

“If you’re changing your car’s oil,” he said, “make sure you know the difference between the oil plug and the transmission fluid plug.”

For years, a local named Callum was a go-to guy for non-handy folks with camps, cottages, villas and mansions on The Big Lake. When he retired, he passed some of his customers on to Laura’s handy husband Steve. He sent three different letters out. One (to the nicest customers) said, “Here’s Steve’s number. He’ll take care of you.” One said: “Thanks for your business. Here’s your keys. Good luck.” And the last said: “I think just as highly of you as you have of me all these years.”

Which reminds me of Lucy, housekeeper and handy-person for Doc Johnson, an old-school Yankee. When Lucy decided, after 48 years, to hang up her broom and hammer, she didn’t hold back: “Doc Johnson, I’ve been taking care of this big house of yours for 48 years and you never once told me I
was doing a good job.”

Once, Laura and Steve needed to leave the state for a family function. But how could they abandon their clients in their 30-odd camps, cottages, villas and mansions? Callum helpfully advised: “Just put a message on your answering machine saying, ‘We’re gone for a few days. If it’s an emergency, call Callum.”

After a couple of days away, they called Callum to see how things were going. They got his answering machine. “Hi, this is Callum. I’m out of town for a couple weeks. If you need something, call Steve.”

Laura said Steve was philosophical about the whole handyman gig. Summer people would call in a frenzy because, say, the hot water in the washer didn’t hot up. He’d go over. Move the hot water hose from the cold water hookup to the proper one. Problem solved. Every day was a new challenge: clogged drain, leaky faucet, ceiling fan not fanning, door swelled shut, tree on the roof, weed-whacker won’t whack, smoke puffing out of the fireplace, rodents.

When he came home after addressing yet another dire emergency, if Laura asked how it went, Steve would say, “OK.” Or “Fine.” Or “No biggie.”