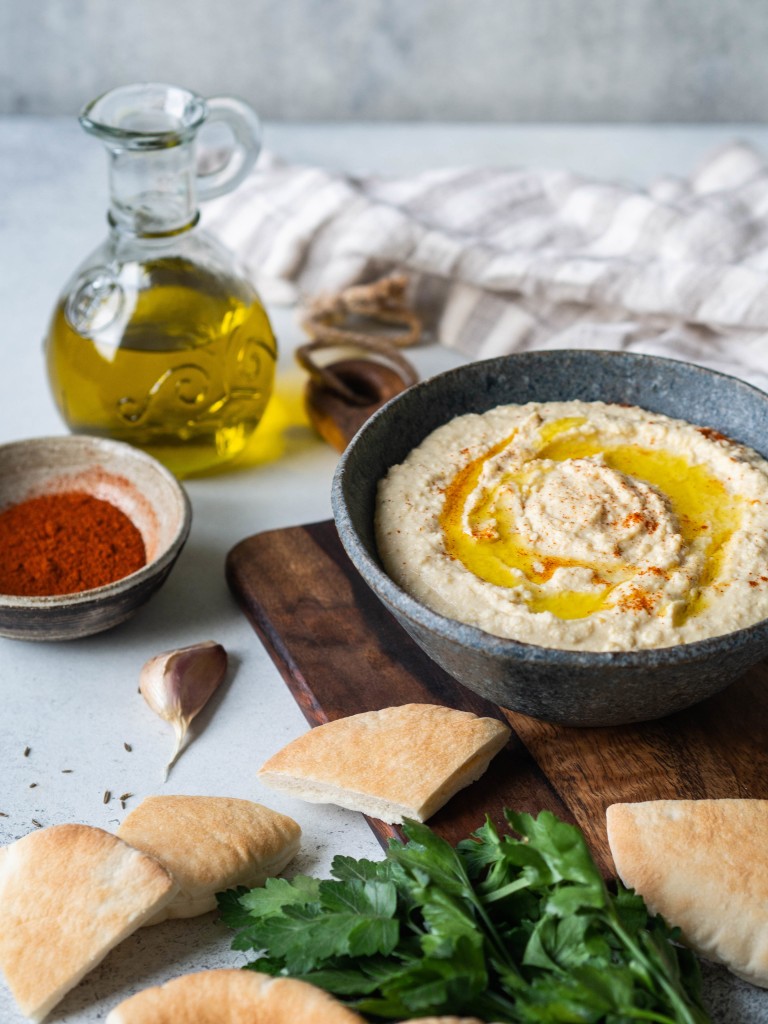 It all started with granola bars. The once-healthy snack of flower children was hijacked and corrupted, soiled with chocolate chips and infused with sugar and corn syrup until it became nothing more than a coarse candy bar.

Next, it was yogurt, the smooth and tart staple of my youth, made by my mother from scratch (she always kept some starter culture in a baby food jar in the refrigerator). Commandeered by the mega-food giants, yogurt was injected with sugar and additives and transformed into a gelatinous confection.

Now, they are coming for hummus. Recently, I was stunned to find that “Dark Chocolate Dessert Hummus” is now available on grocery shelves, right next to the “Apple Pie Dessert Hummus.” If there was any doubt about the end of civilization, the evidence is right there in your local supermarket.

Growing up in a large Lebanese American family in south Manchester, hummus was present at every occasion. And with 27 aunts and uncles and 44 cousins, there were many, many occasions. Almost every week saw a birthday party or two or perhaps a wedding or christening. And then there were the Sunday all-hands gatherings at my mother’s Ganem homestead on Silver Street, or at the Ashooh Brothers market garden where Brown Ave. meets Queen City Ave. And at every stop there were ample supplies of hummus — the delicious prelude to every meal. The mortar of our cuisine.

Our traditional hummus preparation ritual was simple and satisfying: Hand-grind the garlic and salt, mash the chickpeas, and fold in the sesame tahini, cumin and lemon juice. Dishes of hummus were placed strategically in several rooms with a light coating of olive oil and a sprinkling of paprika. Next to the hummus: a basket with triangles of Arabic bread, and alongside the breadbasket, a dish of raw red onion pieces. Take a triangle of bread, wrap it around a piece of red onion, and use it to scoop up a healthy dollop of hummus.

While traveling in the Middle East, I’ve found that hummus is remarkably consistent throughout the region. Whether in Lebanon, Saudi Arabia or the UAE, in a home or a restaurant, one can always find great hummus accompanied by unfailing hospitality.

When hummus first started appearing in grocery stores, I was bemused that such a deeply ethnic creation with an odd name would go mainstream. I never thought it would catch on, especially because early versions were poor substitutes for our handmade delicacy. But it did catch on, and the supermarket products got better and better. I sampled a few brands and found that, with a squirt of fresh lemon or dash of virgin olive oil, they were quite serviceable.

But soon, different flavors emerged, like roasted red pepper. OK, that’s not so crazy. After all, Muhammara, a Syrian red pepper dip, is also a staple of Middle Eastern appetizers. Then, I saw more radical variations making the scene like “Green Goddess” and “Spinach and Artichoke” hummus. This, I thought, is unnatural. I just couldn’t picture my Sittoo Latifeh whipping up a batch of “Everything Bagel Hummus.” But taste, after all, is personal, and in the spirit of tolerance and diversity I didn’t make a scene in the refrigerated section of the grocery store.

However, with the subversive amalgams we are seeing today, it seems that hummus is going the way of potato chips. Sure, barbecue flavor was fine, and salt and vinegar had a mysterious appeal. But now I stand in the snack food aisle staring blankly at shelves of transmogrified potato products, paralyzed by indecision. Suddenly, it all became clear to me: Hummus is being zombified! Grotesque, soulless hummus mutants trying to take over our world! I had to speak out, lest we forget our ancient culture, our proud heritage and, most important, what authentic hummus really tastes like.

Hummus made from scratch

Truly, there is nothing like the rapture of homemade hummus. It is simple, delicious, satisfying and healthy. Here’s all there is to it:

Just crush the garlic in a bowl with the salt, mash, and add the garbanzo beans, then the tahini, cumin and lemon juice. You can also do it the easy way and throw everything into a food processor, but where’s the fun in that? Adjust the consistency with a little water or more lemon juice. Mix well and put into a shallow serving bowl. Garnish with olive oil and paprika. And don’t forget some red onion pieces on the side! Of course, people scoop up hummus with just about anything these days, from Arabic or pita bread to chips to all varieties of raw vegetables.

You can also turn hummus into an entrée found throughout the Middle East by browning some ground lamb or beef. Drain the fat and combine with sautéed onion and pine nuts and a dash of salt, pepper, cinnamon and allspice. Spread some hummus on a plate, top with a spoonful or two of the warm meat mixture and scoop it all with Arabic bread.

There’s no doubt that my love of hummus owes partly to the warm memories the food conjures of dear relatives long since passed, and of the chaotic but loving home I shared with my beloved parents and six siblings on Calef Road. But that’s the power of the stuff. It brings you together and keeps you together.

Do your part to save hummus! Make a batch today and unite against the food moguls! Tell them to keep their chocolaty and appley hummus perversions. It’s genuine hummus for me. It is perfection just as it is, a miracle food that has nourished and comforted our family for generations and even unites Arabs and Israelis. Make it part of your culture too. And if you feel like something sweet, just have some candy, or maybe a granola bar.

The post Save the Hummus! appeared first on New Hampshire Magazine.