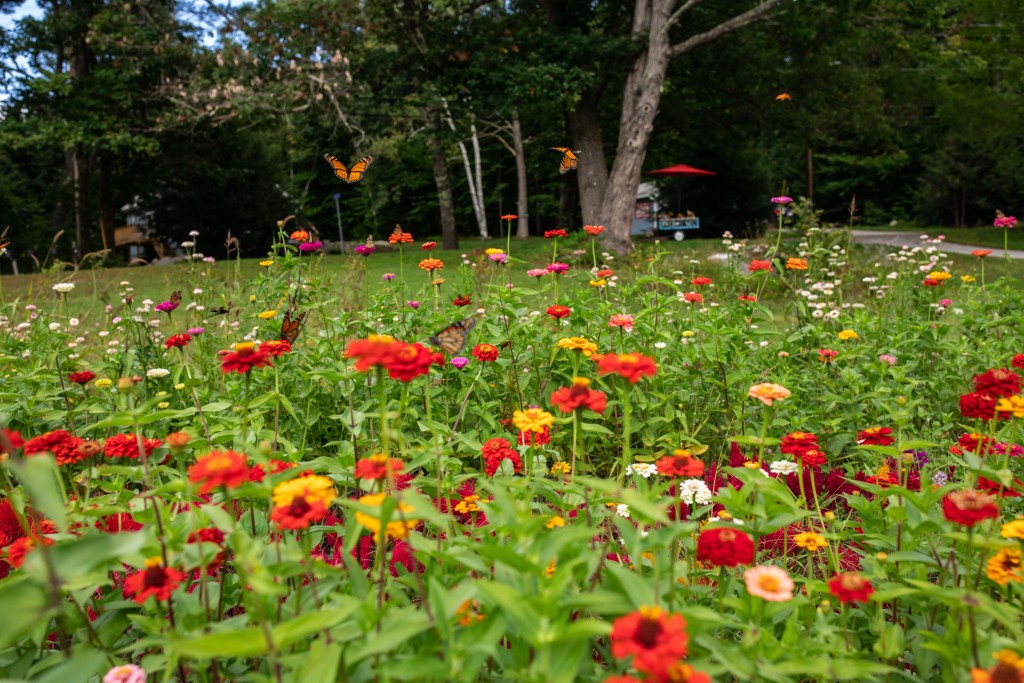 The glory of gardening: hands in the dirt, head in the sun, heart with nature. To nurture a garden is to feed not just on the body, but the soul. —Alfred Austin

How does a landscape architect go from designing world-class golf courses to selling cut flowers in a small New Hamsphire town? For Howard Maurer of Lake Sunapee Flower Farm in Newbury, it was simply a matter of following his heart. “Don’t get me wrong,” he says, “I love designing golf courses. It has taken me all over the world, and I still have some courses in the works, but flowers are my true passion. For years around Sunapee, I was known as the crazy guy with the flowers,” he laughs.

When he and his wife Lorrie had a chance to purchase a farm that had been in her family, little did they know that it could lead to this. “We had no intention of going into this business. I have a few degrees, one of them is ornamental horticulture, which my kids always made fun of,” he says. “So, when my older daughter wanted her wedding at our house, I told her that since I had a degree, I would be growing the flowers. I grew basic stuff, and florist Alli Coy of Allioops! in New London was able to work with it and make all the arrangements.” It was at this point that he decided to open up the flower farm. Coy is now his best client and they’ve become good friends.

“We had no idea how to go about starting a flower farm,” he says. They planted annuals first — zinnias, sunflowers, cosmos, lisianthus, feverfew and bells of Ireland, along with dahlias and delphinium. “We’ve added more perennials and peonies over the years,” he says. Eventually, he built three greenhouses to extend the season. This will be his fourth year selling flowers. 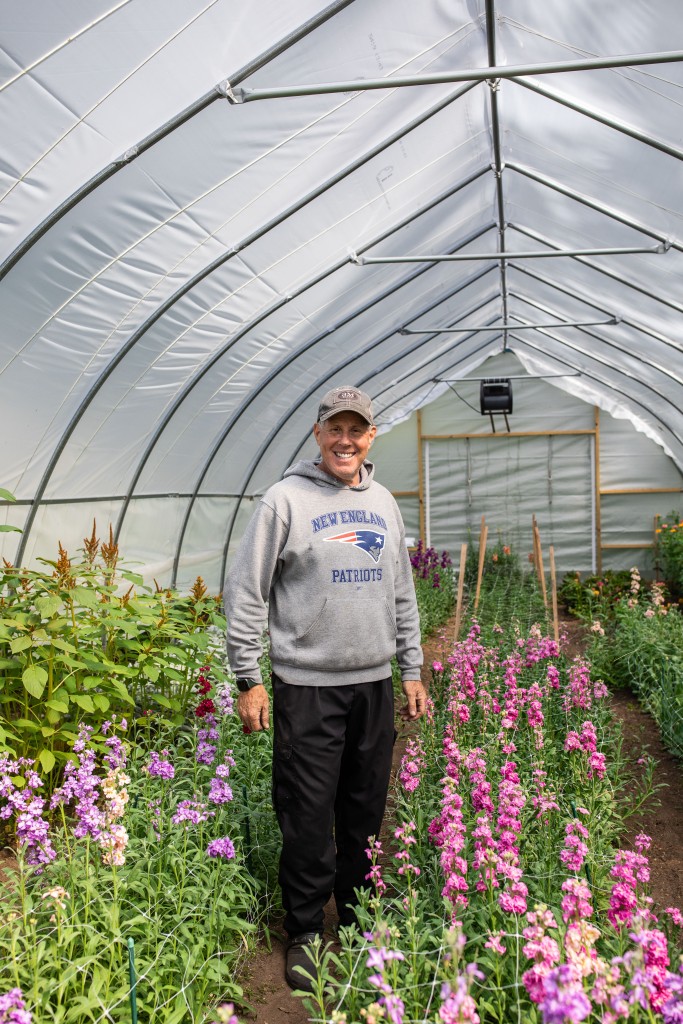 The season begins early since Maurer starts many of the plants under lights in his basement. As soon as the soil warms up in the greenhouses, planting begins. Dahlias are a prime crop, and he has about 2,000 tubers that are dug up each fall, wintered over inside, and then divided and replanted in spring — a monumental task. Since no poisons or insecticides are used, to shield the dahlia blooms from damage by insects, Maurer ties a fine mesh bag over each blossom to protect it. Beneficial insects take care of many bugs, and Maurer uses yellow sticky cards to trap others. “We are very conscious of the lake and try to be the best stewards possible. We are sustainable and follow organic practices, but we are not 100% organic or certified. We are very tolerant of some of our pests and assess what damage is acceptable,” he says. Working in the golf industry, he is well versed in integrated pest management.

Insects aren’t the only pests that threaten his crops. Deer, turkeys, woodchucks, chipmunks, birds and voles eat more than their fair share. “We’ve had all sorts of animals. There are bears that appear every year, and they have no problem coming by during the day,” he says.

Lorrie works from home and helps out when she can, but otherwise it is a one-man operation. Having drip irrigation attached to a pumping system is an extreme time-saver when it comes to watering and fertilizing. “We use drip irrigation on 95% of the total area. We have an old dug well with a limited amount of water, so we need to be careful how we use it,” he explains.

A flower cart of ready-made bouquets is parked at the end of their driveway Thursday through Sunday, and they sell out fast. He grows more than enough flowers to supply Sweet Beet in Bradford, Warner Public Market and local florists, including Allioops! in New London. “We love when florists and event planners visit and are enchanted with the farm. It’s also great when florists are doing events at The Fells and they can get fresh local flowers from a couple of miles down the road,” he says.

On Saturday mornings from Memorial Day to Labor Day, you will find him at the Sunapee Farmers Market. “At first, I didn’t want to do a farmers market, but it has been a huge success for us and lots of fun,” he says. This time of year, along with dahlias, zinnias are the backbone of his summer bouquets, which may also include sunflowers, yarrow, veronica, feverfew, ageratum and snapdragons, to name just a few.

If you buy one of his fresh, locally grown — not flown — bouquets, you will notice the difference and be hooked.

Categories: Family-friendly things to do