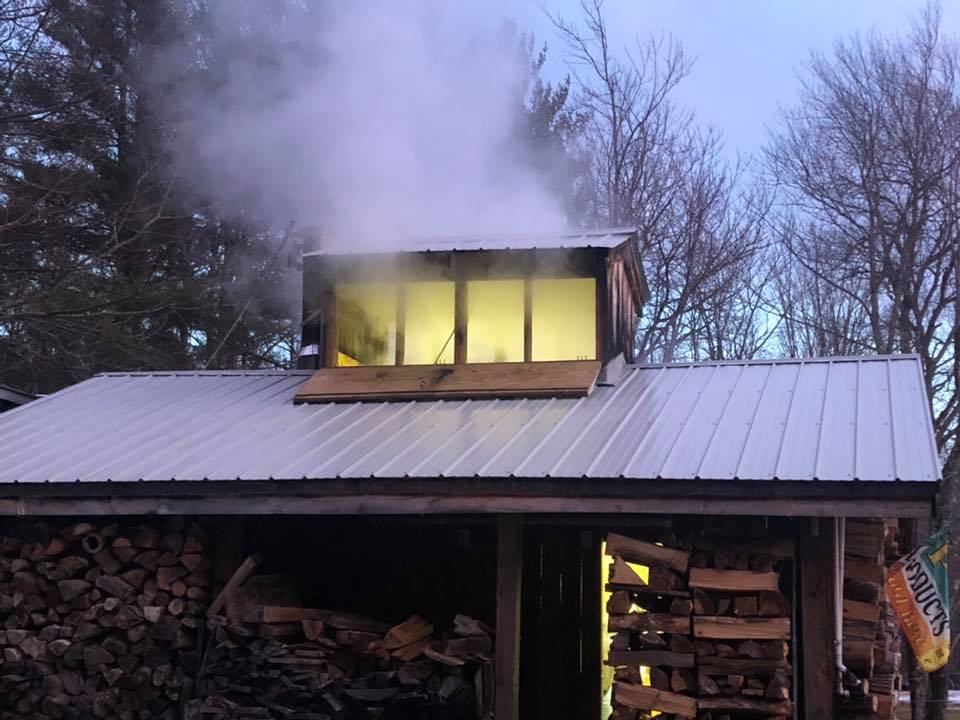 We may be biased, but we stand by the fact that Granite State maple syrup is where it’s at. Visit a sugarhouse and get a closer look at the maple process during New Hampshire Maple Month is held March 1 through March 31. Sugarhouses around the state will open their doors to the public (with masks and social distance rules in place), offering a behind-the-scenes look at how sap becomes the delicious stuff that graces our Sunday brunch tables. To help celebrate this tasty, golden month, we’re starting a series of “Meet Your Local Sugar House” profiles to introduce you to some of the sweet sugar houses around New Hampshire and the men and women behind them.

For our latest profile, meet Kate and Tim Robinson. Kate and Tim are the co-founders of Turkey Street Maples, a sugarhouse that’s been operating in Chocorua since 2008. Read on to learn all about the sugarhouse and this year’s sugaring season.

Tell us about the history of your sap house.
Kate and Tim: “In 2006, with over 25 years of sugaring experiences with friends and families, Tim began making plans for building a sugarhouse on the land where we live. Construction began in the fall of 2006, when the concrete slab was first poured. The remainder of the construction took place in the late spring and early summer of 2007.  ‘Four Stooges Construction,’ (as Tim fondly refers to his crew, comprised of his father John, his brother Ed, his friend and former sugaring partner John D., and Kate’s father Bob) constructed the sugarhouse in less than four weeks. The wood-fired evaporator and arch were moved in late summer 2007, and Tim patiently waited for spring to come to begin boiling. He began running sap lines in the summer and fall of 2007, ending up with 475 taps for the maiden voyage year of Turkey Street Maples. March of 2008 marked the first draw of maple syrup in the new Turkey Street Maples sugarhouse. The sugaring season ran until about mid-April this first year and 85 gallons of syrup was produced.”

What’s the story behind the name of your sap house?
Kate and Tim: “No real big story. The sugarhouse is located on Turkey Street, so thus Turkey Street Maples. Our logo was created by a good friend who is an amazing artist.”

What makes your sugarhouse special or different?
Kate and Tim: “Turkey Street Maples is a true dooryard sugarhouse. We still use a wood-fired evaporator. You won’t find a ton of bells and whistles here. You will just find good hands-on syrup making!”

What are you best known for?
Kate and Tim: “We are known for our maple syrup, clarity and taste. We are also known for our knowledge of and willingness to share the process.”

What was it about the location that attracted you?
Kate and Tim: “We built our sugarhouse in the dooryard so it would be conveniently located and easy to get to for those late nights of boiling.”

Tell us about the most memorable day you’ve had working on the farm.
Kate and Tim: “Some of most memorable visits are ones with newcomers who have never tasted maple syrup, or seen the process, experience it for the first time and become lovers of maple syrup.”

Tell us a secret or little-known fact about your farm.
Kate and Tim: “Tim has been making maple syrup since he was about 8 years old. He started helping the neighbors in 1982 and has made maple syrup using several different types of evaporators from homemade to commercially fabricated.”

Do you have anything exciting planned this season – new products, experiences or milestones?
Kate and Tim: “This is our 14th season in our own sugarhouse. New Hampshire Maple Weekend is March 19 and 20, and we will be open from 10 a.m. to 3 p.m. both days. Visitors can help collect sap and learn about the process of making maple syrup, and we will be allowing small groups into the sugar house to witness the process. This year we also have a new pint glass for creating all of your maple cocktails or maple milk. Roberts Farm will also join us again this year with maple cotton candy for sale and maybe even some beef jerky! You can also purchase our delicious maple syrup on our website shipped directly to you or for curbside pick up.”

What keeps you passionate about doing what you do?
Kate and Tim: “We love to share our passion for making maple syrup and introducing new customers to the process and unique taste of syrup. In fact, Tim has helped get a sugaring program started at Madison Elementary School where Kate is a teacher.”

How can people best support you right now?
Kate and Tim: “Keep purchasing maple syrup and sharing liquid gold with ones you love!”