We recently tapped into the experts from the Granite State Ambassadors to tell us about their favorite places in the state for pet-friendly, family-friendly, wheelchair accessible and healthy senior fun. These local experts have special knowledge of their regions of the state and their favorite recommendations for guests with specific needs, but first here’s some background on how the Ambassadors came to be. 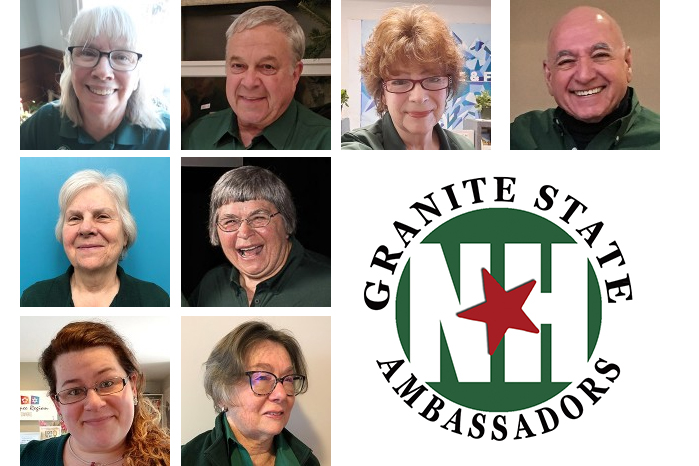 As do so many great things in New Hampshire, it all began with a casual conversation between colleagues. This one took place a little more than 25 years ago.

Judi Window was executive director of the Southern NH Convention and Visitors Bureau at the time, and was sharing a vendor booth with people representing the state of New Hampshire at the Made in NH Expo. As they chatted, the state primary was ramping up. Flocks of media were arriving at the Manchester Airport where volunteers were on hand to answer questions from reporters about where to go and how to get there. Such useful volunteer service inspired Window, who declared, “I could do that year-round with a group of volunteers!”

Soon the NH Granite State Ambassadors (NHGSA) was born, and now, suddenly, it’s been a quarter of a century. It’s hard to imagine the state without these cheerful, knowledgeable greeters and explainers who are on hand at just about every event of significance to the state’s culture and economy, or anytime people might need to know where to go and how to get there.

And, yes, you might have noticed that they do serve year-round at the Manchester-Boston Regional Airport (as it has been renamed), just as Window promised.

In 1996, the organization started as a committee underneath the Southern NH Convention and Visitors Bureau, evolving into its own 501c3 nonprofit in 1999 under the guidance of its three co-founders: Judi Window; Peter Morgan, proprietor of the then-Highlander Inn near the airport; and Bill Petersen, dean of hospitality at the nearby New Hampshire College (now Southern New Hampshire University).

The founders prioritized education, establishing a certification program to give volunteers a well-deserved sense of achievement. Petersen developed a training regimen based on Leadership NH’s modular program and focused on the state’s seven tourism regions. Speakers from organizations and industries were enlisted to broaden their knowledge while having fun and embracing their love of their state and individual communities. Monthly tours to increase volunteers’ knowledge of New Hampshire were begun by Window. The first tour was a guided hike through Wolfeboro (“The Oldest Summer Resort in America”) led by Window’s friend, the legendary Millie Beach, founder of the Lakes Region Tourism Association.

Another conversation, when former governor Jeanne Shaheen began turning DOT rest areas into welcome centers many years ago, was a stepping stone for the organization to expand statewide.

Common themes over the years include a passion for New Hampshire, enriching the lives of volunteers, and positive contributions to the hospitality and tourism industry. The enthusiasm and dedication of the volunteers, from the inaugural class to 25 years later, has been unyielding. NHGSA volunteers and industry members leave guests with a positive impression that encourages repeat visits and endures, benefiting the state’s economy.

With the support of its key partners, the Manchester-Boston Regional Airport and the NH Division of Travel and Tourism, NHGSA serves as a conduit between partners in the tourism and hospitality industries, as well as state and federal agencies
and organizations.

Since NHGSA initially expanded its scope to include the Made in NH Expo and the NH Farm, Forest & Garden Expo, it’s grown to encompass more than 20 events, including The Big E in West Springfield, Massachusetts.

The organization continues to grow and evolve, but its mission and roots provide the constant theme. Executive Director Kelly Bryer has been with the organization in different capacities since 2002. Emily Goulet, the communications director, has been involved with the organization since 2018. They continue to build and cultivate the NH Granite State Ambassadors’ legacy forging partnerships, fostering volunteer engagement and increasing educational opportunities.

Thanks to the founders and current staff, and to the dedication of the volunteers, the Ambassadors will continue to serve the state and adapt to a changing world.

And we look forward to the spring of 2096 when lovers of
New Hampshire can all reflect with pride upon the countless adventures and discoveries that will constitute the Granite State Ambassador century.