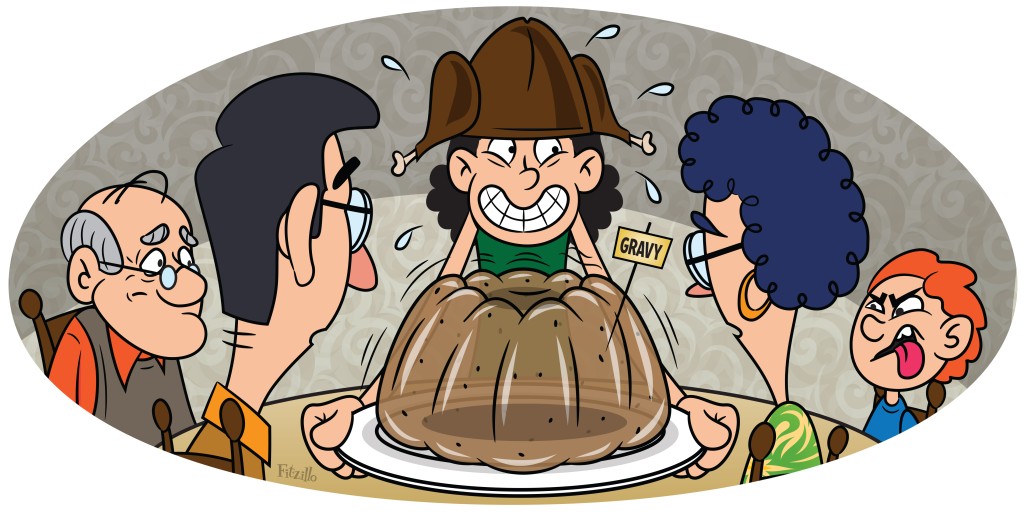 Each year, Dad moonlighted over the holidays dressing turkeys for Blake’s Turkey Farm.

As a kid, I didn’t know exactly what it meant to dress a turkey, but I was pretty sure it didn’t involve high heels and chiffon. Besides extra bucks, he’d score a huge, fresh gobbler, which my mother would roast. Thoroughly. A cautious yankee, she took no chances with undercooked meat. Steak was the same color all the way through — just this side of charcoal. With pork chops, it was hard to tell flesh from bone until you’d gnawed awhile.

Thanksgiving eve, she’d assemble the stuffing: bits of spongy bread and tossed with onion, celery, apple and poultry seasoning, compressed into the bird fore and aft, then laced tightly with string and skewers lest it try to escape. She’d tent the bird in tinfoil and roast it through the night.

Dinner was always on the table by noon. By 12:30, we would  be complaining about having eaten too much and clearing the dishes.

At some point, I became the designated gravy-maker. Don’t know how it happened. Wish it hadn’t. The responsibility was nearly as enormous as the bird. Gravy was the pièce de rèsistance of our Thanksgiving table.

Meat too dry? Pour on the gravy.

Potatoes underdone? Mash in the gravy.

Stuffing overseasoned? Drizzle with the gravy.

Uncle Herb gets lippy? Drizzle him too.

Gravy mattered. The meal couldn’t begin without it, and I couldn’t start the process until the bird was out of the pan and the potatoes out of the big pot to make way. Meanwhile, the family waited: shoulder to shoulder at the table, utensils in hand, poised, hollow-eyed, famished — like a perverse Norman Rockwell painting.

I’d scrape the browned bits and dilute the drippings with water before transferring them to the aforementioned big pot, then skim the visible fat. Cornstarch whisked with water in a bowl and combined — not-too-fast — with the broth, stirred constantly as it comes — not-too-fast — to a brief rolling boil. Last step: into the gravy boats, one for each end of the table.

Sounds simple enough, I know. But gravy can be tricky. Too much water and it’s flavorless. Too little cornstarch and it’s runny. Too much cornstarch added too fast into drippings inadequately stirred and boiled just a little too too long … disaster.

“Gravy’s ready!” I declare to the hungry horde. A grumbling of approval. Turkey, peas, onions, stuffing, potatoes and cranberry sauce are passed hand to hand. Uncle Herb says, “I need a pea.” Someone places one pea on his plate. The gravy comes around last. Aunt Barbara lifts a boat for a healthy pour. But it doesn’t. Pour, that is.

Undeterred, she spoons a substantial, congealed mound onto her potatoes where it sits like a beige bowler hat.

Barbara pokes the hat with her butter knife. It shimmies, much like the adjacent cranberry sauce. “It’s fine,” she says, because she is a kind soul.

But it wasn’t fine. Instead of a rich, brown gravy that pulled the whole meal together with its savory deliciousness, I’d created an abomination.

The following Thanksgiving, I thought for sure someone else would be recruited to make the gravy and I’d be demoted to opener-of-the-pickle-jar or napkin-folder. No such luck. Nothing at all was said about the previous year’s debacle. Nobody — and I mean nobody — stepped up. Once the gravy-maker, I learned, always the gravy- maker. No matter what. Like the Supreme Court, it’s a lifetime appointment.