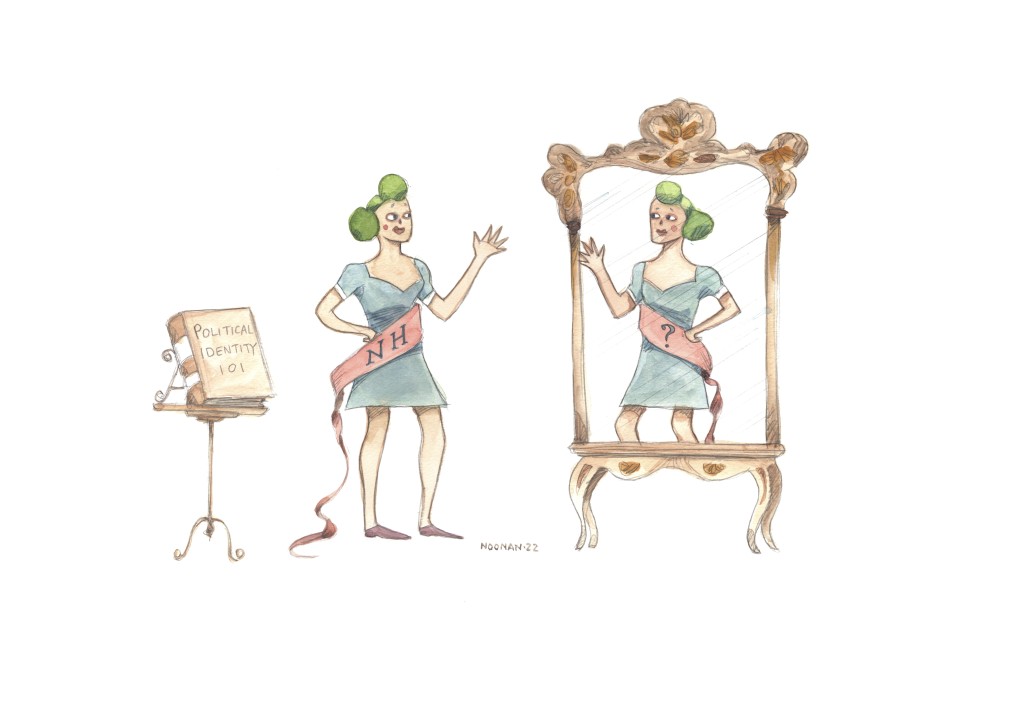 Political theorists say the last century was about ideology and that this one is about identity. This certainly sounds true for global affairs. Last century, the main discussion was about communism versus capitalism or socialism versus democracy. This dynamic organized the world. The Cold War ended, and was followed by a backlash against globalization, causing many all over the world to try to make sense of what it means to be from a certain place.

In 2022, there are specific examples: Is Ukraine something wholly different than Russia What is America all about and who are we as individual Americans, especially after the Covid lockdowns reoriented so much thinking?

Even on the state level, we live in an age when the definition of New Hampshire is the very thing being debated.

Before, this was mostly a proxy debate. Two sides debating, say, the state’s lack of a seat belt law could both find reasons to believe they were the ones better adhering to the state’s ethos. One side could argue not having a law is in the spirt of the Live Free or Die motto. The other could argue the lack of a seat belt law costs us national highway money and cuts against the entire point of the state’s tolls, lack of sales tax, highway liquor stores and cheap cigarettes aimed at gaining revenue from outside the state.

But, really, both sides were debating their own ideologies.

Now the state’s two political parties are obsessed with identity on a more visceral and personal level, but they are doing so in different campaigns.

Democrats have essentially fetishized diversity over other qualifications for elected office. In the previous decade, Democrats could be forgiven for trying to just find candidates who looked and sounded the same as Jeanne Shaheen — their most successful politician in a generation. Indeed, 2010 was the last time Democrats nominated a straight white guy to Congress. He lost badly. But lately, the conversation has changed, and there is a reason why the discussion for any position begins with personal attributes like race, gender and sexuality before other qualities like judgment or experience and ability to win. Mind you, it could be the other way around.

In a recent conversation on Twitter, State Rep. Matt Wilhelm, a Manchester Democrat, commented that a leading Republican state representative was pushing more anti-abortion measures ahead of what many believed would be an overturning of the landmark abortion law by the U.S. Supreme Court this summer. As things go, it was a typical tweet.

But then State Sen. Becky Whitley, a Hopkinton Democrat, responded, “So we’re just supposed to trust male politicians as we watch state after state institute trigger laws preparing for what we all know is coming?” Wilhelm and Whitley are colleagues and both favor abortion rights, but doesn’t her identity-driven response suggest that anti-abortion Sarah Palin is somehow more to be trusted than Joe Biden simply because she is a woman?

Meanwhile, Republicans are continually at war internally about their own identity. The discussion has moved beyond questions of allegiance to Trump to suggestions that Republicans these days must display some version of a socially conversative libertarianism. Suddenly a Sununu — a name synonymous with New Hampshire Republicans — is being called a fake Republican.

Where all of this leaves everyone else in the state, who are mostly not engaged in these conversations at all, remains very unclear.

However, a state that was deeply Republican for a century before coming a swing state, then leaning Democratic and now fully run by Republicans in Concord is definitely in the middle of a political identity crisis.