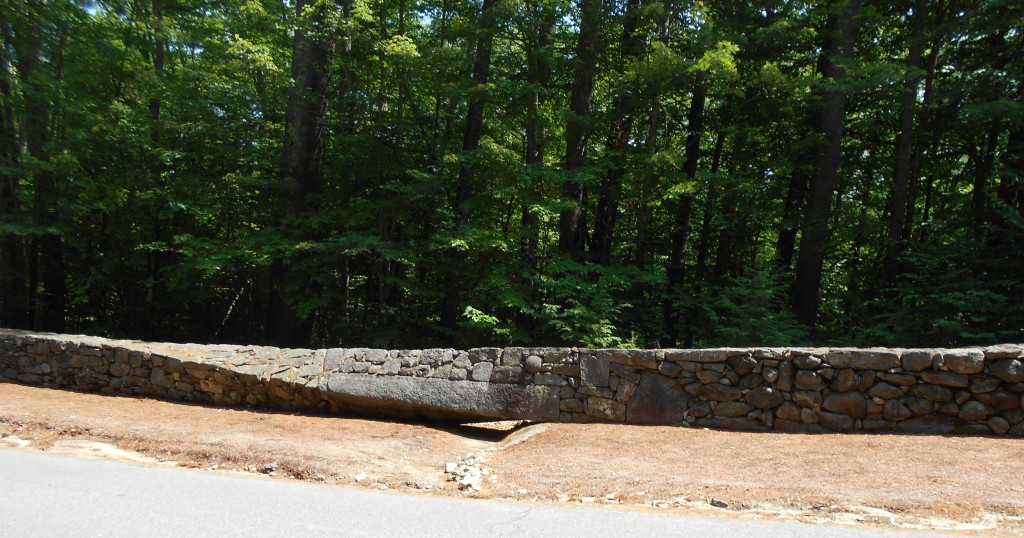 This dry-laid wall has a graceful twist at its midpoint.

I was driving down a backroad in the New Hampshire Lakes Region, when a stone wall suddenly jumped out and grabbed my attention. It’s not uncommon to see stone walls paralleling the backroads, but this one was different and demanded a second look. I pulled over and walked back for a closer view. This unique stone wall follows the contours of the land until it comes to a small drainage ditch, which it deftly jumps over. While spanning the ditch, the stone wall also rotates in a gravity-defying twist that had me scratching my head and puzzling, “How’d they do that?” Farther down the road, the stone wall again leaps up in the air, arcs like a mini-rainbow and comes crashing down on its end, creating the appearance that the wall dived underground and left a void beneath itself.

With its perpendicular edges and flush square faces, the construction of this stone wall resembles a long line of giant Rubik’s Cubes placed in seamless alignment until reaching the midpoint twist. At the twist, each side rolls over 90 degrees in a slow, graceful turn. The top of the wall becomes the road face, the road face becomes the wall bottom, and the bottom becomes the backside of the wall. It then continues down the road as though nothing spectacular had just happened. This dry-laid wall has no mortar at the joints and no hidden superglue holding the stones in their unnatural position. The transitions into and out of the twist are so gradual that it has an almost optical-illusion appearance. How was the builder able to do that and why?

The “how” remains a mystery to me, but the “why” is likely the result of a skilled stonemason demonstrating that he had the talent to do the impossible. Stonemasons taking pride in their work and showcasing their skills have been trying to build the better stone wall for as long as landowners have been hiring them to stack the rocks picked from their fields. Stone-wall builders have had plenty of practice as farmers have been clearing stones from their fields and building stone walls since New Hampshire was first settled by the Europeans.

Most of the stone walls in New Hampshire, however, were built in the early 1800s when the sheep craze swept the state and mills were demanding all the raw wool that farmers could produce. There was a ban on imported English wool, and the newly introduced Merino breed of sheep was outperforming all the other breeds. The Merino produced more pounds of fleece, and the wool of the Merino was finer and softer than the itchy, scratchy wool of the English sheep. Suddenly, there was significant money to be made on the rocky subsistence farms. New Hampshire farmers expanded their flocks with the new Merino breed and scrambled to clear more pastures and build enclosures. Removing rocks from hayfields and pastures and using those same rocks to erect stone walls achieved both goals. 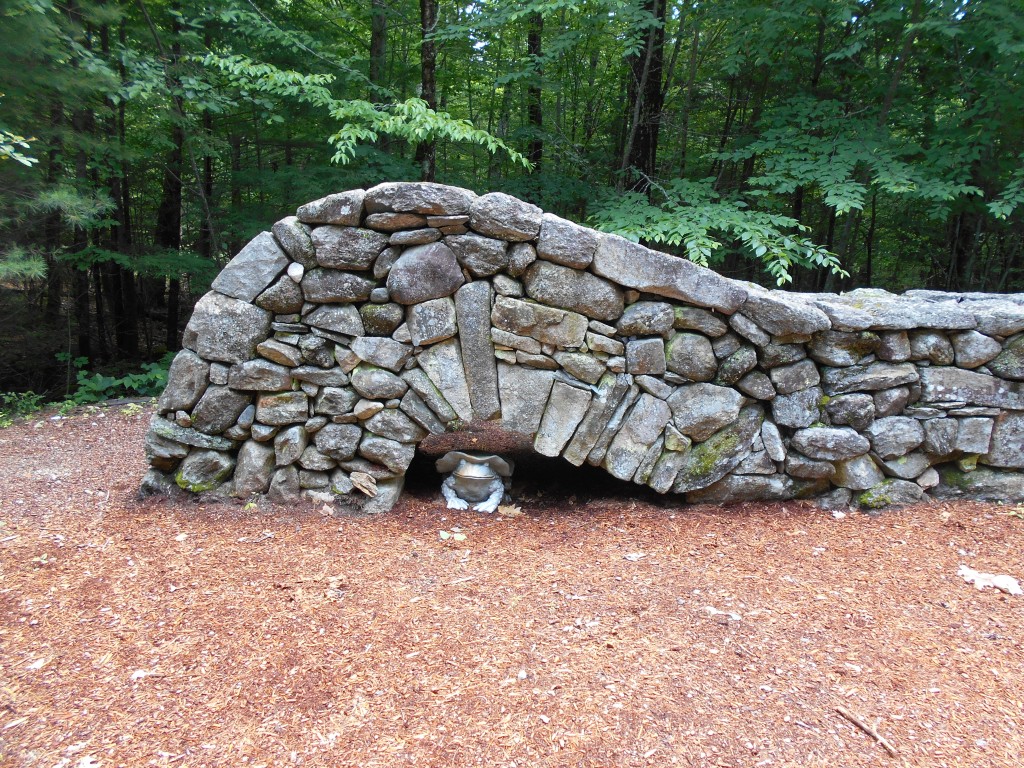 A touch of whimsy sets the mood for this uniquely peculiar specimen of stone-wall construction.

This new Merino sheep had suddenly become available in America after centuries of prohibition and strict control by the Spanish government. The quality of the Merino wool was so superior to the old English breeds that the Spanish government had tried to limit the export of live Merino sheep, meaning Spain would be able to dominate the market for the desired Merino fleece bringing premium prices at the hungry woolen mills.

This Spanish stranglehold on the Merino breed was broken, however, by an American diplomat named William Jarvis from Vermont. Jarvis was appointed by President Thomas Jefferson to serve as a U.S. consul in Portugal, and while stationed in Lisbon, he purchased a flock of some 4,000 Merino sheep. Jarvis smuggled his flock out of Spain, through Portugal, and across the ocean to his farm in Vermont. Jarvis was able to smuggle the sheep out of Spain by taking advantage of the political upheaval and disarray created during the military invasion of Spain by the French general Napoleon Bonaparte. Staying one step ahead of Napoleon’s advancing army, Jarvis purchased small flocks threatened by the plundering French army and quickly moved them into Portugal and on to Vermont.

A story is told that during the fall of 1807, after more than a decade of hostilities, Napoleon had taken control of most of Europe by conquest, treaty or forced alliance. The emperor general had just soundly defeated the Prussians and Austrians at the Battle of Friedland, and he had their allied Russian army bloodied, humbled and on the run back to Moscow. Napoleon held a council of war with his generals in the aftermath of the battle to decide how to proceed. Napoleon favored pursuing the fleeing Russian army. If he could catch it and destroy it, there would be nothing to prevent him from taking Moscow and securing his empire to the east. His generals advised against this. Winter was approaching, and the French army was not provisioned for a Russian winter.

To Napoleon’s west in Spain, rebel uprisings were trying to overthrow the Spanish government, which had allied itself with the conquering French emperor. Napoleon’s military advisors favored returning to France, reoutfitting the army, putting down the Spanish rebellion, and then returning to face the Russians the following spring. Napoleon, exhausted from the day’s battle, announced he would sleep on the two options and decide in the morning. The next morning, the weather dawned miserably cold and wet with a freak early-season snowstorm. Rather than march his army towards Moscow and a cold Russian winter, Napoleon decided to turn toward the warmer climate and moved his army into Spain to combat the dissent.

If this Napoleon legend is true, then could the ultimate cause-and-effect reason why I’m now standing in the middle of a New Hampshire backroad, looking at a skillfully constructed rotating stone wall … be because of a freak snowstorm in Prussia during the fall of 1807? Or is that just twisted logic?

Categories: What Do You Know

The post How’d They Do That? appeared first on New Hampshire Magazine.