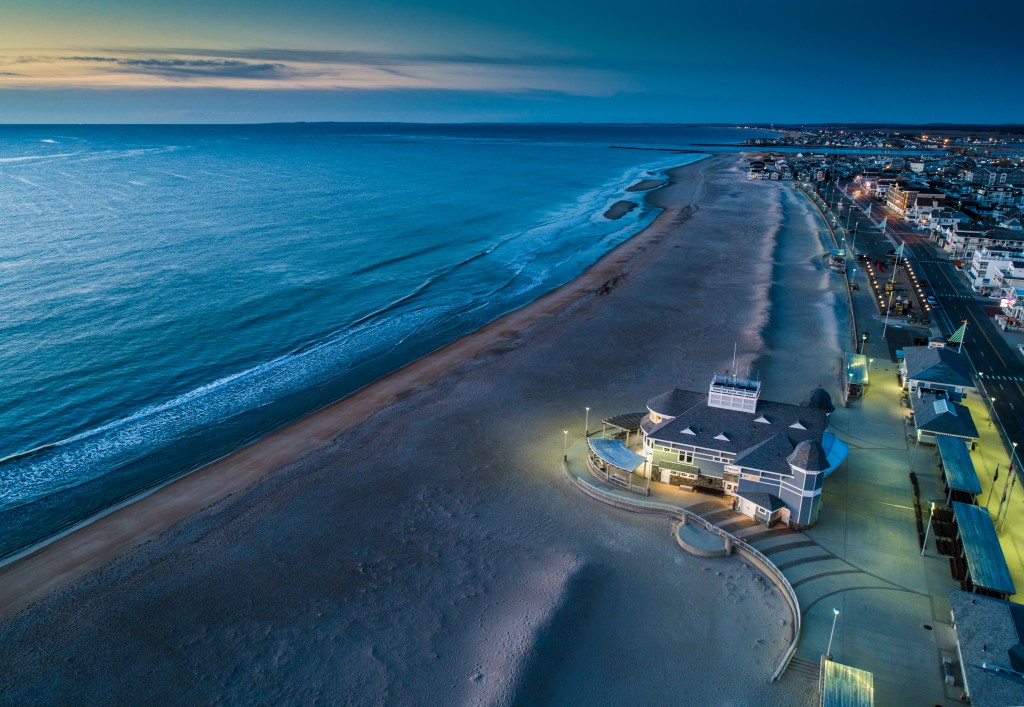 Dawn at the Sea Shell Stage and beyond on Hampton Beach by Marie Sapienza.

Have you ever wanted to fly like a bird but have a fear of heights? Well, no worries — not everyone is genetically engineered to be a fighter pilot or Amelia Earhart. But, with a little imagination, a few technical skills and a small drone, you can experience the joy of flight without leaving the ground: Take in the vista, watch the river run, get a new perspective on your neighborhood, and cruise smoothly with the wind beneath your rotors and your feet planted firmly on the Earth.

Today’s drones use GPS, radio frequency and Wi-Fi for guidance and rely upon many recent-year improvements in cameras and batteries. Enthusiasts have been building and customizing their own drones since 2012, but the market has really expanded in the last four years with ready-to-fly systems. That’s the good news. Now, let’s look a little closer.

Consumer-level drones, also known as quadcopters, could be considered a cousin to radio-controlled (RC) aircraft where hand controllers give enthusiasts the joy of flying
a mini-replica airplane. Drones make no attempt to masquerade as the Red Baron, but the onboard camera, and the ability to hover and turn like a helicopter, change the game. Still, there are some restrictions — both RC aircraft and drones are classified as unmanned aerial vehicles (UAVs) and are under heavy regulation by the Federal Aviation Administration (FAA) to ensure safe airspace for airplanes and the property and people below.

Flights for modelers (those who fly model aircrafts) and pilots of small drones under 250 grams (.55 pounds) have to be at or under 400 feet in altitude and in uncontrolled airspace (Class G). The operator must have visual line of sight (VLOS) of the vehicle, so range is limited. Use in other airspaces are permitted with prior authorization, and can be acquired “on the fly” in some cases through low-altitude authorization notification capability (LAANC) with the AirHub app. Thankfully, the software will not let the UAV be flown in restricted airspace.

Recent FAA changes allow small drones equipped with rotor guards to fly over people and at night with lights. Recreational drone pilots do not need a pilot’s license, but the craft needs to be registered with the FAA using the number marked on the craft. The fee is just $5. Though not required at the moment, soon recreational flyers may need to pass the recreational UAS safety test.

It gets more serious for commercial drone operators. They are required to get a pilot’s license under the FAA’s Part 107 regulations. Also, the definition of recreational or commercial is not based on the size of the vehicle but the purpose of the flight. Want to give an aerial photo to your employer? That’s commercial. It is mandatory to ask for waivers before flying above 400 feet in restricted and unrestricted airspace and at any level over public parks or privately owned land. Oh, and yes, in 2023 all UASs will need to support remote ID to provide identification and location to the FAA.

This double rainbow over Sunapee Harbor was captured by Peter Bloch with his DJI Mavic Pro 2 that sports a Hasselblad camera.

The FAA regulators are doing their best to keep enthusiasts happy and commercial UAV pilots profitable, while keeping airspace safe for passengers. And, indeed, it is illegal for drone operators to harass or invade the privacy of those on the ground but, no, you can’t shoot one out of the sky since landowners do not actually own the airspace above their property.

In addition to FAA regulations, New Hampshire passed a law in 2016 making it illegal to conduct video surveillance of a private citizen lawfully hunting, fishing or trapping. Local municipalities and state parks might also have their own set of restrictions.

There is a lot to learn before taking flight. Kyle Hirshkind, the program manager for the UNH Drone Academy, says they began classes for commercial pilots in 2017 after the interest in drones really took off.

The courses help commercial pilots pass the necessary tests, plus learn how to fly the craft and take and process video and stills.

“We see police officers, real estate agents, photographers, farmers and hobbyists sign up for our two- and four-day classes,” says Hirshkind. It’s hands-on training, as they offer a fleet of practice drones for student use.

But what type of drone is best for you? For beginners and hobbyists, drones are surprisingly small and fold up even smaller. The ideal quadcopter is under 250 grams — the legal weight limit the FAA has set for hobbyists and recreational use. DJI is a respected manufacturer, and their Mini and Mini 2 models are just a palmful, but have amazing agility, and the Mini 2 even offers 4K video. All rigs have a return to home (RTH) button that monitors battery life to get the drone back to its starting point.

Flight speed can get close to 40 mph, but in cinematic mode, at 14 mph, the video is very stable — think of those IMAX theater shows of flights over Earth’s most interesting terrain. Squint just a little and you can reproduce that — at a lower altitude, of course. The video and photos recorded on the onboard SD card are acceptable — however, photo enthusiasts have become post-production experts, using computer programs to enhance, edit and add music to their flyover movie experiences. Prices range from $350 to $800 for these mini models.

The next-larger-size drone is often used by serious enthusiasts and professionals who have managed to make money with their aerial photography and videography skills. At this level, you do need to get a pilot’s license, which goes deep into FAA requirements — the sorts of things actual, real small-plane pilots need to know, minus how to fly a real plane. These larger models can be more agile, hover smoothly, go farther with more robust connectivity, have object avoidance, and better onboard cameras. Prices ranges from $1,200 and up.

Marie Sapienza of Newton is a lawyer by profession but an artist at heart. She was introduced to photography in her grandfather’s darkroom. Now, in addition to her traditional still photos of seascapes, landscapes and night shots of the Milky Way, she has taken to the bird’s-eye view with her DJI Phantom. Her artistic eye guides her aerial lens, but it can be tricky to shoot in “official” places like our state parks, she says: “It will be a turf war to legislate rights to airspace. It is a huge deal that
will be fought in the courts at some point.”

As a lawyer, Sapienza is happy to be afforded the freedom to pursue photography. “And earning money for commercial shoots doesn’t make me feel so bad about spending so much money on drones,” she says. She is thinking her next purchases will be a foldable model, like the DJI Mavic 3, to carry in a backpack, along with a newer model with  customized camera and the FAA’s remote ID system built-in.

Top-of-the-line models for photography range from $5,000 to $20,000 for carbon fiber construction, 5.2k video and 360-degree rotating gimbals for all-around views from the mounted Hasselblad camera. Best not to crash one of these. By the way, you can purchase liability and crash insurance. Might be a good idea.

Anthony Dolan is a Sunapee real estate agent who was flying for fun and paying for aerial real estate photos when he realized he could do it himself, especially since he already had an art background. Now he takes all his own commercial stills and video from his DJI Inspire quadcopter. And, of course, he has his pilot’s license. “The FAA is going to be cracking down hard in the near future,” says Dolan. “All they have to do is monitor YouTube for suspicious flights and connect a few dots. All the evidence is recorded in the software,” he says. 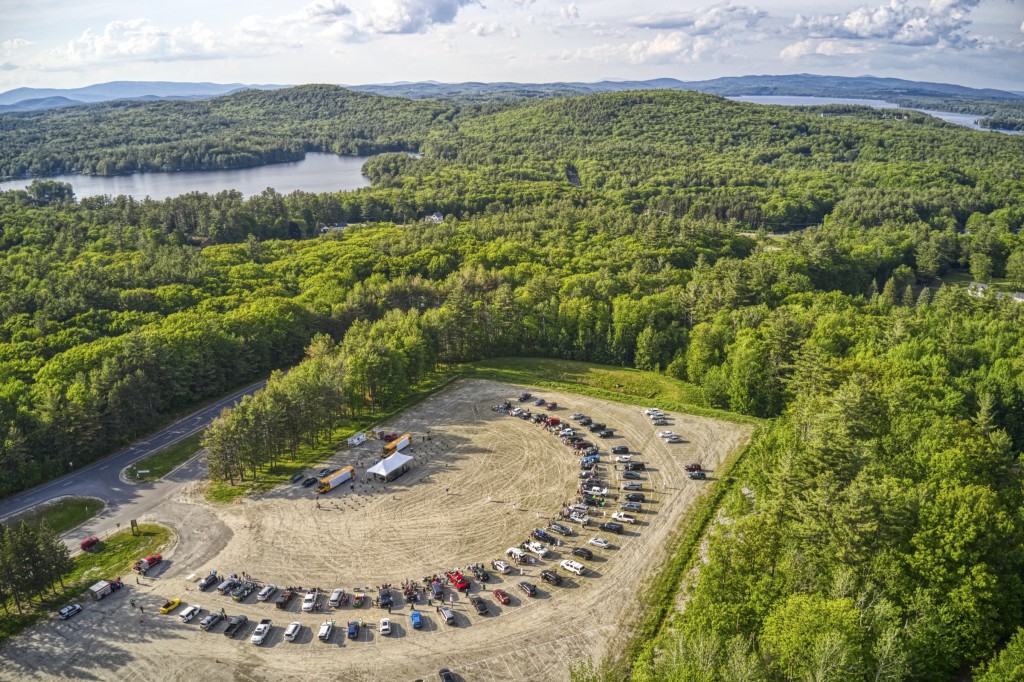 Anthony Dolan captured his daughter’s socially distanced graduation ceremony during the pandemic with views of Lake Sunapee in the distance.

Beyond photography, there is a new world of high-speed drones. First person view (FPV) looks to be crazy fun. The operator sees the drone’s view via a pair of goggles, which also sport the antennas. Yes, it is a geeky look, but the experience appears to be immersive. You are the bird now! But don’t break the FAA’s rules. You’ll need another person on hand, a “visual observer,” to ensure your situational awareness as your view is limited to that of the drone’s camera.

Aaron Levesque of Nashua is the administrator for the Facebook group 603 FPV Drones and also helped start the North East Racing Drones club. “I spend a lot of time chasing cars,” he says, by which he means piloting his FPV drone at the Epping Dragway or motorcross events to follow racing cars — without being a nuisance, of course. It takes real piloting skills with “the sticks,” as FPV drones are fast, reaching speeds of up to 89 mph, in order to follow cars. Plus, competitively racing these tiny drones through a course with 5-foot-square gates has become a thing at FAA-approved facilities.

At 34, Levesque, like others his age, was born with a joystick in his hand. “My childhood dreams are now a reality,” he says. What was virtual piloting now happens in real time and real space. And the crashes are real too.

“If you don’t crash, you’re not flying hard enough. It’s no problem, I built the plane and so I can fix it too,” says Levesque. For FPV beginners, he suggests the Emax Tinyhawk for indoor flying with goggles ($219).

With all the commercial applications and competitive recreational use, the future is ripe for more technical development. Researchers at the University of Florida are training students to use a simple headset ($500) or brain computer interface (BCI) to guide craft. Beam me up, Scotty!

If you are not ready to gear up, it’s still possible to enjoy drones and their capabilities. Find countless shared videos from licensed drone pilots on Facebook, YouTube and Vimeo. Fly over glaciers, national parks or view “ballet” performances of synchronized drones for light shows at night. Google “FPV” and “bowling alley” for an amazing flight on YouTube. Watch other FPV drone pros race their rigs through obstacle courses — it’s almost as thrilling as watching Anakin Skywalker pod racing against Sebulba in the Boonta Eve Classic.

For less nerve-racking viewing, woodworker Peter Bloch of New London has a series of evocative flyover shots on Vimeo choreographed to music — some even composed by his wife Kathy Lowe. He’s perfected that peaceful easy feeling as he takes flight over marshes and streams, revealing colorful reflections and carefully curated patterns of foliage and forestation. Take a virtual trip, it’s worth it.

For better or worse, drones are everywhere — exactly 1,782,479 of them as of January 2021, according to the FAA. You’ll notice their use in cinematography with high and wide shots in movies and even tight shots in television ads where you fly right along with the FPV drone through a building or car window. Notice, too, the overhead shots on the evening news for a fire or accident. Drones are even being used on Mars! And maybe one day you’ll hear a slightly annoying buzz and find your throughly researched and 4.3 star-reviewed, waffle maker on your front step. Amazon’s Prime Air and the FAA are currently hammering out the details for delivery via drone.

Above all, fly safe. Fly Free or Die is not the state motto. FAA fines will reportedly be in the $200,000 range. Public safety is serious business, but quick delivery can be important too.  Look — it’s a bird, its a plane — no, it’s the Cusinart Waffler Pro — and just in time for breakfast! BUZzzzzzZZZZ.

Mobile app sanctioned by the FAA:

Visit Throw Stones at Drones on Facebook. The author decries the annoyance of drones, but applauds useful applications.

Categories: Family-friendly things to do