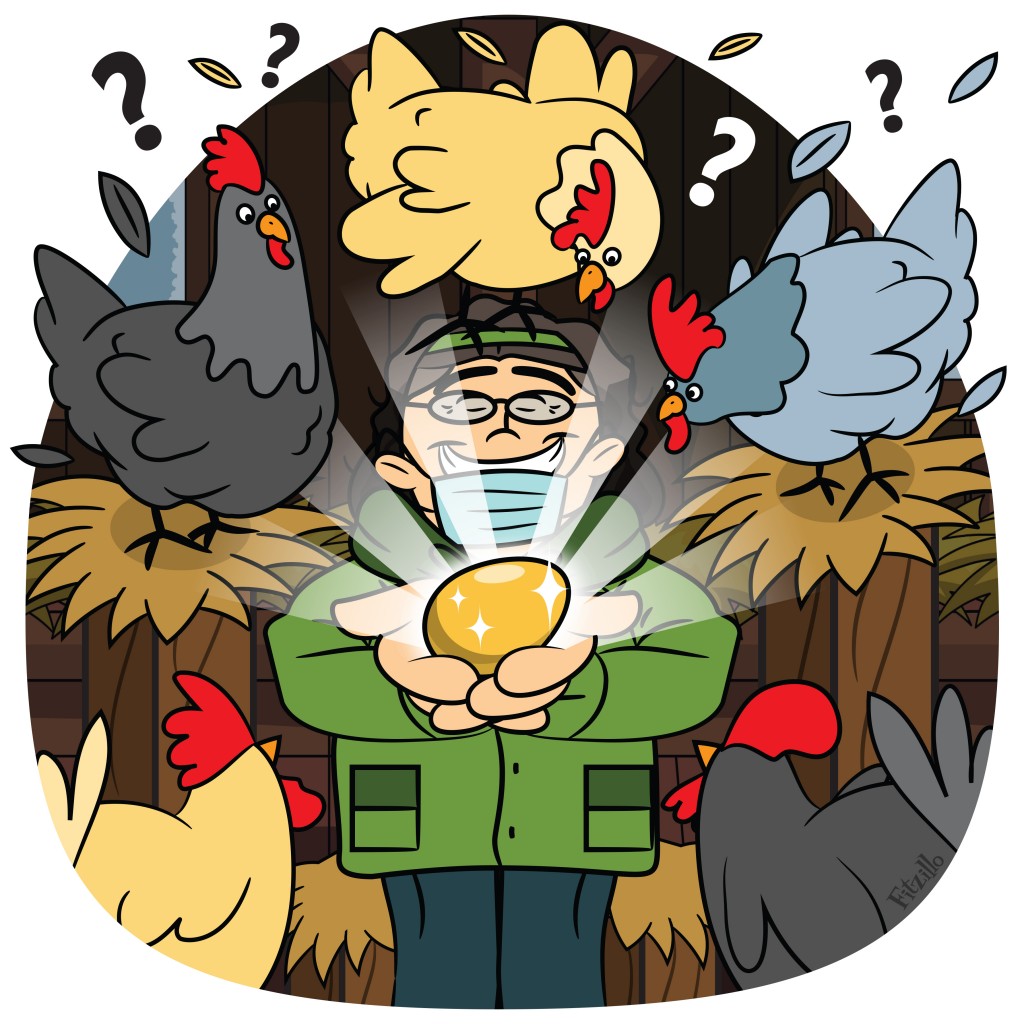 In the woods I found an egg, abandoned by feral guinea fowl. “Hatch me,” the egg said. I showed my grown-up daughter, who lives over the garage. She googled incubation. If we’re going to incubate one egg, we agreed, might’s well incubate a bunch.

It was early in the pandemic. Money was tight, we were homebound, toilet paper was scarce. Could an egg shortage be far behind?

A friend raises Lavender Orpingtons, Cuckoo Marans and Black Australorps. So fancy! We bought a dozen eggs, likely fertile, because roosters in spring get especially roostery.

The homemade cardboard incubator wasn’t cutting it, so we bought a real one. Also a thermometer and humidity gauge. We eschewed the automatic egg turner. My daughter would turn them every five hours.The guinea fowl egg exploded right off the bat. Rotten. The others hung in there and, after three weeks, started to wiggle. Six little dinosaurs pecked into the world.

They were, as my mother would say, awful cunning.

We bought a brooder and a heat lamp. Put marbles in the water dish so the fuzzballs wouldn’t drown. They liked the warmth of cupped hands. They sat on our shoulders and heads. Feathers sprouted. We were entranced.

Soon, I thought, there will be eggs.

Supervised, the chickens pecked around the garden and the lawn. If someone was reading on the swing, the chickens hopped up to cuddle. Lap chickens. We were a happy family.

Except for … Gregory Peck, the larger of our two roos. If I failed to hear the pad of his feet in a back-field maneuver, he’d nail me. Every chance he got. Blood on the beak.

I didn’t mind. Much. Roos will be roos. But when Gregory Peck got after the other roo — our gentle boy, Alexios — action was required. We banished the Peck-Man to a separate coop, St. Bridgid’s Monastery.

Egg production, I learned, depends on light. Hens need at least 12 to 16 hours of daylight to lay. By the time our chickens were mature enough, summer had passed and we were headed into the dark months — October … November … December.

Come next spring, I thought, there will be eggs. Chickens gotta lay. Eventually. Right?

Sure enough, almost one year and many dollars after finding that rotten guinea fowl egg in the woods, we collected our first egg.

I called the family together and held the egg aloft. The sun shone upon it.

Since then, the chickens have continued to lay. They keep us fed and — more importantly — entertained.

A friend donated a lonely hen whose partner had died of old age. A friend of a friend donated two plucky survivors of a bear attack that had decimated their flock and reduced their coop to rubble. Gregory Peck cohabitates with a sweet hen who tolerates his cantankerousness.

Recently, a fully vaccinated visitor from the city seemed impressed with our operation — two coops, pimped-out yard, tetherball cabbages. “But don’t the neighbors complain?” he asked.

It’s true. The roosters crow at dawn and continue to crow joyously throughout the day.

“No complaints,” I told the visitor from the city. “The neighbors all have Covid chickens too.”

The post Covid in the Time of Chickens appeared first on New Hampshire Magazine.