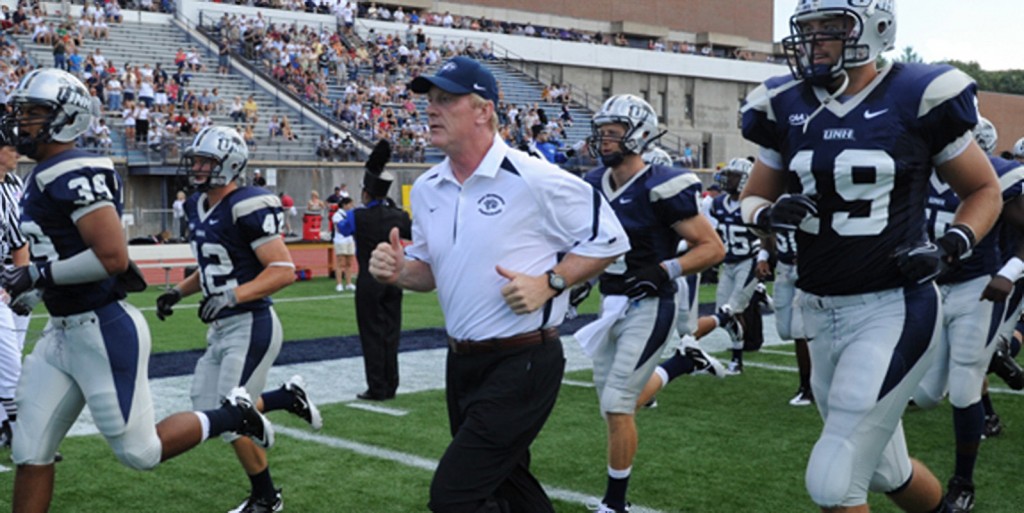 Sean McDonnell grew up in the Thoroughbred horse racing mecca of Saratoga Springs, New York, and worked summers through high school and college delivering hay and oats to the stables, so he knows about long odds. Nonetheless, the head football coach at the University of New Hampshire never bet he’d have to beat them not only once, but twice in the last two years.

McDonnell, who starred in the defensive backfield from 1975-78 for the Wildcats and captained the team, is in his 30th year on the coaching staff and his 22nd as the program’s wildly successful head coach. On August 26, 2019, he stunned the UNH community with the news that he needed an indefinite medical leave of absence, and he would later disclose he had bladder cancer.

“You’re going along as good as it gets and then you get hit with a lightning bolt. You, your players, your staff, your friends and your family all have to adjust. I was really fortunate that I was diagnosed early,” says the coach, who credits his team of specialists at Massachusetts General Hospital in Boston and Wentworth-Douglass Hospital in Dover for his recovery — he turned 65 on October 15. “They were off-the-charts good. You realize how lucky you are with all the people who take care of you, and when they take care of you like this, it’s really something special.”

The outpouring of constant support and kindness McDonnell and his wife, Jenny, received from UNH President James Dean, Athletic Director Marty Scarano, his current and former players and coaches, and the students is something special too.

“It was overwhelming, and it was very humbling,” says the man known as Coach Mac. “It was pretty cool because it showed what the University of New Hampshire is all about.”

That goes both ways. According to the conventional wisdom, Coach Mac is the personification of UNH. He’s even called Mr. UNH.

“I don’t know about that. There are a lot of other people, and I can think of a ton of them, who are more deserving. That’s longevity. That’s being in a place for a long time,” he says.

After playing for the legendary Bill Bowes, who coached the football team from 1972-1998 and is a member of the College Football Hall of Fame, he took over the program in 1999 and carried on his mentor’s tradition of excellence. Then McDonnell added his own stamp. Destined for the Hall of Fame himself, he took the Wildcats to the playoffs in 14 consecutive seasons.

Twice (2005 and 2014) he’s been honored with the Eddie Robinson Award as the top head coach in the NCAA Division 1 Football Championship Subdivision (FCS) and is just one of three two-time recipients.

“Sean is a UNH guy through and through. He doesn’t bleed red; he bleeds blue. That’s who he is,” says Steve Stetson, a Laconia native who was an All-Ivy quarterback at Dartmouth College and gave McDonnell his first job as an assistant coach when he was Hamilton College’s head coach. “What Sean has done for the UNH program is amazing. Twice the national coach of the year. From UNH. That’s unimaginable.”

What is also inconceivable is that as soon as McDonnell conquered his cancer and came back on the job in March of 2020, was ramping up plans for the season, and starting to recruit his next class of student-athletes, the Covid-19 pandemic hit.

“This is going to sound crazy, but the pandemic threw me more for a loop than the cancer did in a lot of ways,” he says. “With what happened to me, we had a plan. We were going to do the radiation, get ready for the surgery, have the operation, get the bladder out, and then go from there with it so it was bang, bang, bang. You get to March 1, everybody says it’s fine, so you’re getting ready for spring practice. Then the pandemic hits. And nobody’s got a blueprint for any of this.”

McDonnell says that when UNH went on spring break, he figured the hiatus would last for only those two weeks. Little did he, or anyone, know that they were all done until the following August.

“You lose March, April, May, June, July with your team and your coaches. There are all these things you have to start wondering about. How many guys can be in the weight room together? How many guys can be in the locker room at the same time? All the protocols for the pandemic wore on me more than anybody ever knew. It was hard. You couldn’t do the things that you normally would with your players,” he explains. “We adapted, as did the whole university.”

Then they only got to play one game before the 2020 season was canceled.

“Every week was a roller coaster. Are we going to play or are we not? We actually had to cancel the Rhode Island game on a Friday (the day before gametime). As bad it was to be diagnosed with what I had and being sick, that other journey was extremely difficult for all of us,” concedes McDonnell, adding that compliance with current NCAA guidelines for Covid testing, isolation, quarantine, and vaccinations for players, coaches and staff presents additional challenges.

But now Coach Mac is back, the culture is intact, and at press time the Wildcats were on track to another winning season.

“When I heard that he had cancer, I knew that if anyone can beat this, it’s Sean, because he’s got such a positive attitude and he’s a fighter,” says Stetson, who was McDonnell’s assistant from 2002-05. “UNH had no idea when they hired him, none of us did back then, what they were getting. He’s evolved season by season, and has risen to such successful levels. It’s been amazing to watch his rise in the profession of coaching college football. Just amazing.”

He adds, “I’ve known Sean since day one and this man is ridiculously talented at what he does. He wouldn’t appreciate that word at all. He wouldn’t consider himself talented in the least. He just thinks of it as work and considers himself a worker. That’s why he gets things done. He is very productive. He’s a man of character. There are a lot of positive attributes put together in one person. I have the utmost respect for this man. He is the man.”

In the intensely competitive world of college sports and its revolving door for head coaches, it’s unusual to stay at one school for this long.

“I’ve been fortunate. The most important thing for me is I’ve been able to share this with my family,” says McDonnell. “My two boys, who never played football but were ball boys, were able to make trips to the away games with me, so that was a lot of fun. Jenny made a ton of trips, and with 14 years in the playoffs, we had some great trips. She has made some great friends with UNH people and the parents over the years. That family atmosphere at UNH is really special to us. UNH is very special.”

The number of coaching trees in pro and college football make it a veritable forest, but through all those branches the tree of UNH Head Coach Sean McDonnell stands mighty tall. Consider that Ohio State Head Coach Ryan Day and UCLA Head Coach Chip Kelly were assistants on his staff.

Kelly, who starred at Manchester Central High School and played at UNH, served under McDonnell with the Wildcats (1992, 1994-98; offensive coordinator 1999-06) before going on to the University of Oregon, where as head coach he won six different national Coach of the Year awards in 2010. Kelly then became the first New Hampshire man to be an NFL head coach (Philadelphia Eagles, 2013-2015 and San Francisco 49ers, 2016) and is now the top man at UCLA (2018-present).

Day, who excelled at Manchester’s Trinity High School prior to being McDonnell’s quarterback in his collegiate career, began his coaching career at UNH (2002) and worked his way up to become Ohio State’s interim head coach in 2018. He got the job in 2019 and led his team to an undefeated season. In January, his team played for the national championship and was ranked No. 2 in the nation.

“Both of those guys were really good coaches. They have an unbelievable IQ for football, an unbelievable feel for kids, they are creative in what they did,” McDonnell says. “It is impressive they’re on my tree, but more importantly, it’s the culture of the UNH program starting with (McDonnell’s predecessor and Hall of Famer) Bill Bowes. Chip and Ryan were part of his regime. I don’t think of it as my tree as much as I do of it being the UNH tree.”

Says Coach Ryan Day, “I would never be where I am today without Coach McDonnell, who has had an impact on thousands of young men over his career. He taught us hard work, dedication and commitment, and I will forever be indebted to him for what he did for me and my career. I’m proud to say he is a very close friend of mine to this day.”