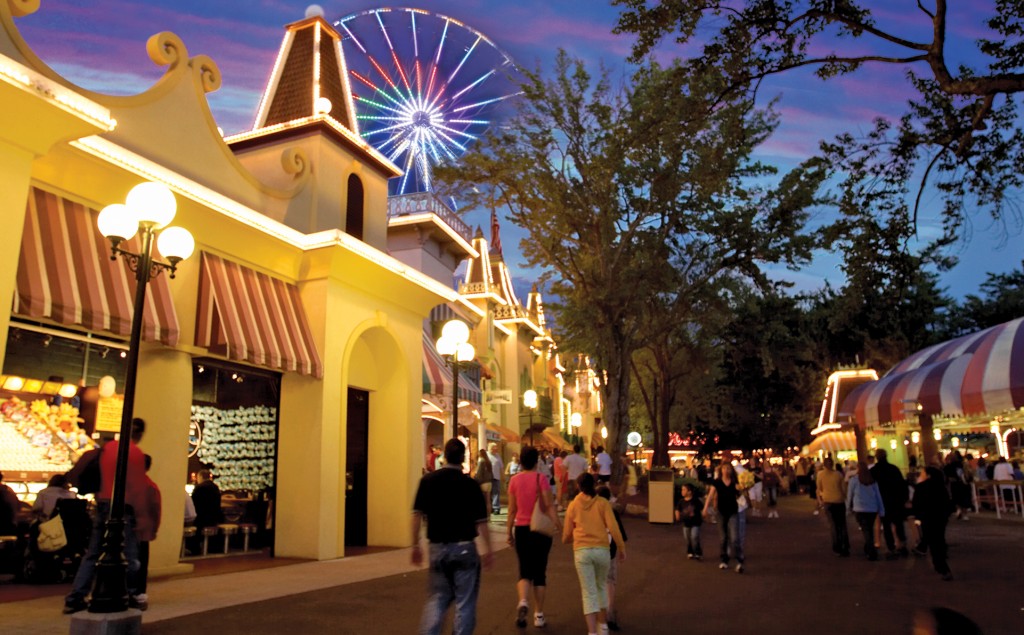 The midway harkens back to the park’s past. The games of chance have been updated and offer more than stuffed animals, with prizes such as Apple watches and iPads.

As far as Chris Nicoli is concerned, Canobie Lake Park’s birthday party is more like a shared festival experience that is happening all summer long for the thousands of New Hampshire residents and visitors who flock to the park. This year is also special because park conditions have returned to a prepandemic level, where each day sees capacity crowds, happy families and summer visitors who are ready to embrace everything that Canobie Lake Park has to offer.

“The overall consistency and integration into people’s lives and history are pretty significant. We’re very proud,” says Nicoli, who serves as the park’s brand manger. “We started in1902, and we are using the same business model. We give people an escape from reality and a break from the outside world,” he adds.

As of press time in late June, Nicoli says park officials were still finalizing their 120th birthday plans. When the park marked 100 years, Nicoli says they served up a 60-foot-long birthday cake and gave a piece to everyone in the park that day. Throughout the summer, he said the park’s Fun Squad will host impromptu parties and perform limbo dances. There are park trivia games and plenty of live entertainment as well.

The 65-acre amusement park, located on Salem’s Policy Road, features the gleeful sounds of people screaming with delight as they descend on the wooden Yankee Cannonball roller coaster, which first came to the park from Connecticut in 1936.

Those same screams and laughter can be heard in every corner of the park, from the water rides and pools on Castaway Island to the Boston Tea Party water ride and the Turkish Twist, and well into the evening when fireworks light up the skies over the lake every Friday from now until Labor Day weekend.

Families are also everywhere, introducing their children to the same kiddie rides they enjoyed when their parents introduced them to the park. The antique cars, Canobie Express train, bumper cars and the antique carousel delight young and old alike. Those who seek a serene and tranquil break from the park’s energy can take a 30-minute cruise on Canobie Lake aboard the Blue Heron.

The end result is an escape from reality where adults suddenly feel like kids again, running from ride to ride, dining on cotton candy, fried dough and ice cream without a care in the world. Throughout the park’s history, Nicoli says each ownership group has embraced the goal to give visitors a theme park experience closer to home.

One of the new things the park has rolled out for its 120th anniversary is the Heritage Trail — a self-guided tour where visitors can locate historical markers and use their phones to scan QR codes to learn about the park’s history.

Some of the things they will encounter include the original trolley stop where visitors would enter the park through the large stone gate near the main entrance, the site of the original Canobie Lake Hotel and Lover’s Walk that led to the lakeside lodge where couples would spend romantic weekends, and the Dancehall Theatre.

The hotel operated from 1902 to 1910 before it was lost in a fire. Nicoli says the park created a haunted house based on photos and postcards of the original hotel for Screeemfest, the Halloween event they hold from September through Halloween.

Nicoli explains the Dancehall Theatre hosted many impressive bands and recording artists, from Frank Sinatra and Duke Ellington to Aerosmith. Even Sonny and Cher appeared soon after their first big hit, “I Got You Babe,” was released in 1965. Park visitors will also discover things like the original Boat House, which dates back to 1902 and offered visitors plenty of canoeing and boating on the lake. 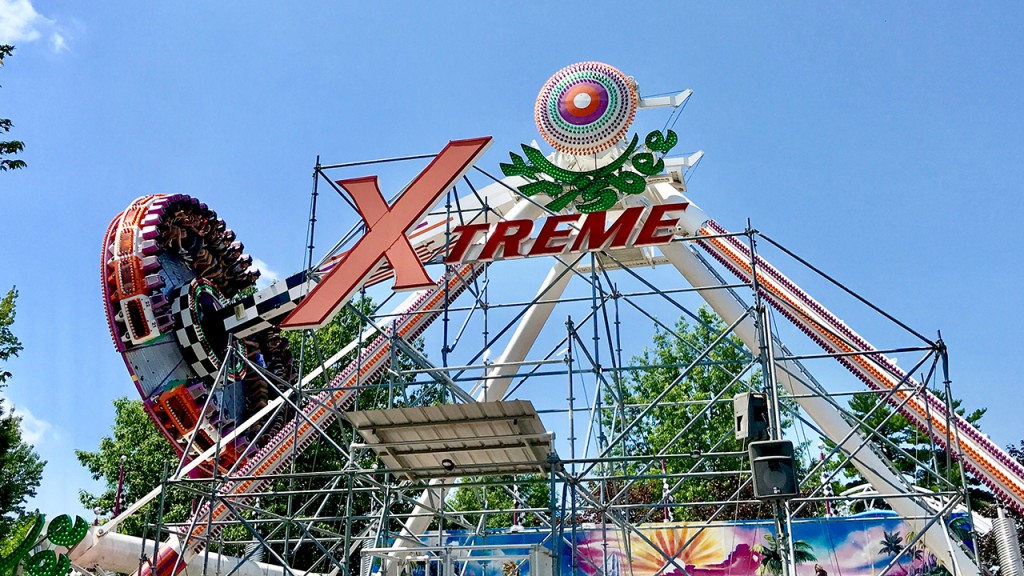 The circular ride carrier Xtreme Frisbee thrills 40 passengers spinning in both directions while simultaneously the center shaft takes riders over 46 feet back and forth in a pendulum motion.

The Timber Trail is another self-guided walk where visitors can explore the original botanical garden and see Japanese red pine and Kwanzan cherry trees along the trail. The rivers purple European beech, noted for its protective canopy, was planted in 2002 for the park’s centennial milestone. The Village Rock also pays homage to Canobie Lake Park’s original owners.

Nicoli says park officials also undertook an extensive rehab project for the antique carousel, which was built in the late 1800s and has called Canobie Lake Park home for decades. “It is both our oldest attraction and newest attraction at this point,” he says.

To fully appreciate Canobie Lake Park’s history and longevity, it is important to understand how it all began.

“We started as a trolley park,” Nicoli explains, which was the norm for many of New England’s oldest amusement parks.

Before automobiles came on the scene, a majority of New Hampshire and northern Massachusetts residents relied on trolley cars to get to and from their jobs at the leather tanneries and other businesses. In 1902, the first trolley car brought visitors from the Greater Lowell region and the cities of Lawrence, Haverhill and Nashua. Eight weeks later, the Hudson, Pelham & Salem Railways opened Canobie Lake Park to give people a destination and a reason to ride the trolleys on weekends.

Nicoli says that during the work week, people would pay a nickel to ride trolleys to and from work, but very few rode them on weekends. The park featured a botanical garden along with canoeing, sporting events, the Circle Swing, picnics and the penny arcade.

It was common for people to dress up in their finest clothes when they headed to Canobie Lake Park. Salem later became the hub for the Massachusetts Northeast Street Railway Company, but the advent of the automobile would bring great changes. Canobie Lake Park actually went out of business in 1929, but fortunately, a new owner who made a fortune by inventing an “electric paving machine” purchased the park and reopened it.

The Yankee Cannonball, formerly the Greyhound Roller Coaster from Lakewood Park in Waterbury, Connecticut, came to Canobie Lake Park in 1936 and the Dancehall Theater followed. The park reached another critical crossroads in 1957 when it sustained a fire, a hurricane and an overall decline in business.

Members of the Berni, Captell and Ulaky families came to the rescue and four generations later, members of those families still own the park, according to Nicoli.

Eye on the future

Nicoli says Canobie Lake Park’s success is fueled by the emotional pull of nostalgia and the owners’ commitment to introduce new rides, attractions, technology and heightened service. Instead of resisting change, Nicoli says they embrace it as part of their mantra.

“We have been pivoting for more than 100 years,” he says.

Nicoli has worked at Canobie Lake Park for 21 years, and he notes how the park is still the quintessential eighth-grade field trip destination for scores of New Hampshire and Massachusetts schoolkids as evidenced by the rows of school buses that often fill the parking lot.

The park employs as many as 2,000 seasonal, part-time team members and 100 full-time staff who work there year-round. A big part of the park’s winning formula is rehabbing its buildings and its emphasis on cleanliness.

Nicoli says all team members, including the owners, will pick up any trash they see right away to maintain one of the cleanest amusement parks in the country.

“We spend a lot of effort maintaining the property,” Nicoli says. “We take pride in our cleanliness, whether it’s our restrooms or the midways.”

Many visitors may not give the park’s cleanliness a second thought, but Nicoli says, “If we were dirty, everyone would notice.”

At a time when people have more home entertainment options than ever before, Nicoli says they still enjoy coming to Canobie Lake Park because what they experience here they cannot experience anywhere else. 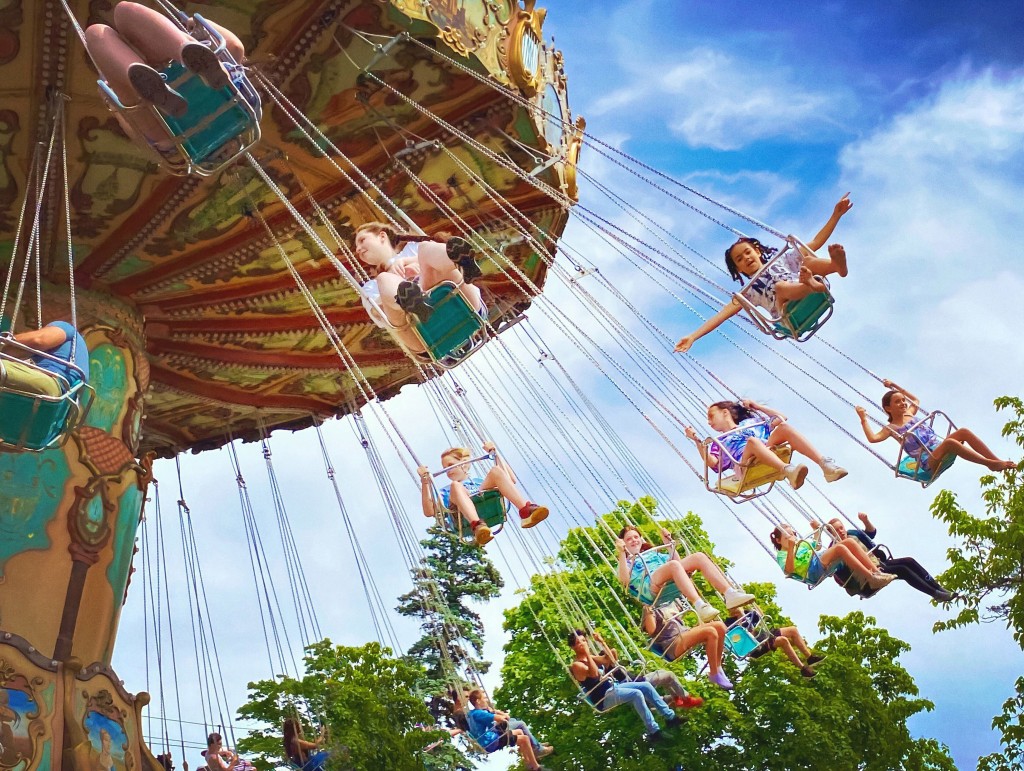 DaVinci’s Dream allows guests to simulate a floating sensation in an Italianesque, swing-style seat, all the while getting a scenic view of beautiful Canobie Lake.

“You can’t go soaring through the air over the lake at sunset while fireworks are launching in the air if you are home sitting on the couch and watching TV or playing video games,” he says.

People who want to spend the day cooling off at the Castaway Island water park that opened in 2019 encounter something that easily rivals a resort they would find in Florida or the Bahamas, Nicoli says.

In addition to the water slides and pools, the water park has 11 cabanas that can accommodate up to eight people. Each cabana includes a high-def TV, refrigerator, and a food service attendant who will take their orders and bring their food and beverages right to their table.

While the owners are always looking to the future, Nicoli says they are still committed to maintaining Canobie Lake Park’s original culture and experience. The park’s longevity is even more impressive when one considers that other former mainstays, such as Whalom Park, Paragon Park and the Salisbury Beach amusement park, have all been lost to history.

Canobie Lake Park has also maintained its edge in this industry despite competition from larger parks like Six Flags New England in Springfield, Massachusetts. Canobie’s location right on the border between New Hampshire and Massachusetts, which represents a virtual stone’s throw from the Greater Boston market, has served it very well.

Visitors can purchase park tickets that include everything from admission to all the rides and the water park, which is a real bargain for families who are coping with high gas prices and inflation. They also offer free parking and a shuttle service if visitors have to park farther away from the park. That is not the case at many other amusement parks. Then, of course, there is Canobie Lake itself, which serves as the perfect backdrop.

In the near future, Nicoli says visitors will be able to preorder food and beverages on their phones and pick them up at food stations similar to what other venues like Fenway Park, TD Bank Garden and Gillette Stadium provide.

Regardless of how much new technology and modern conveniences may be introduced to the park, the roar of Canobie Lake Park’s Yankee Cannonball, the putt-putt pace of its antique cars, and the gentle up-and-down movement of its antique carousel horses will be constants.