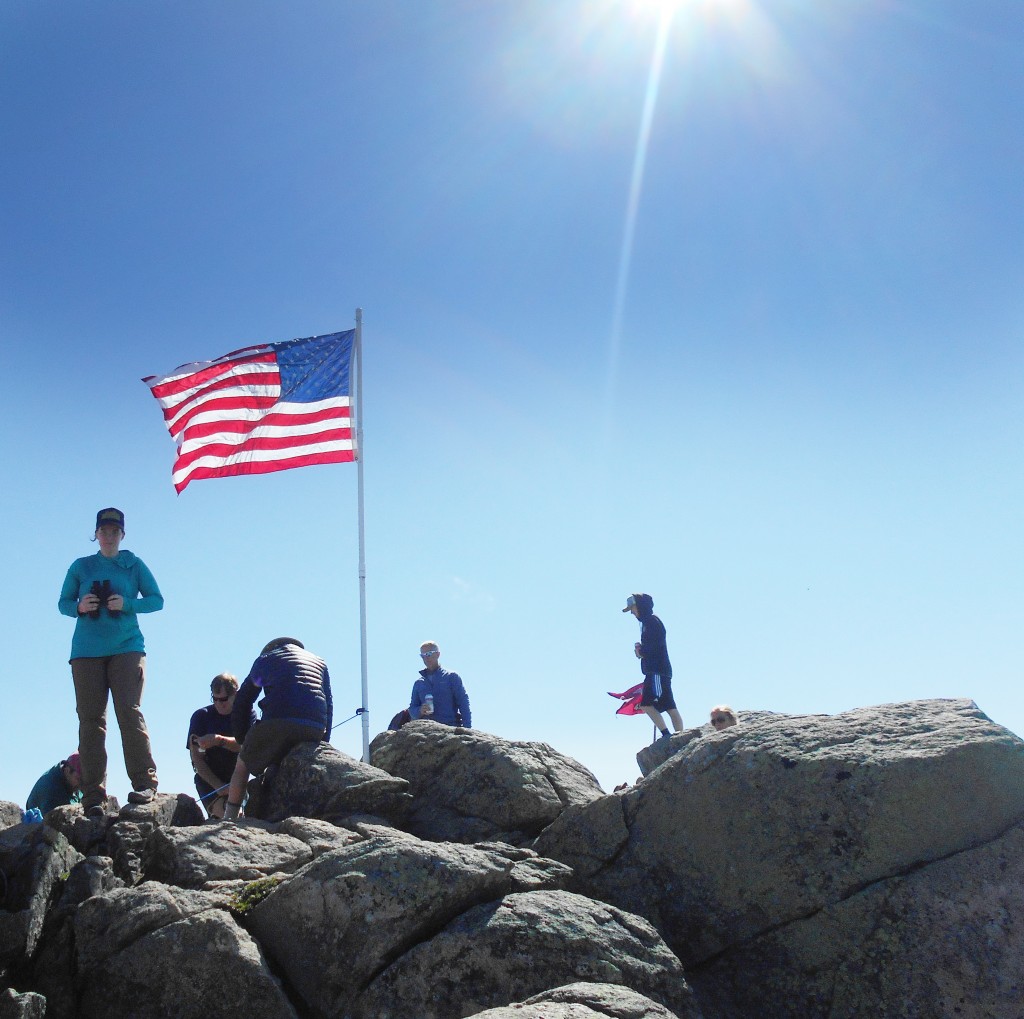 The flag goes up on Mt. Liberty as particpants observe the Flags on the 48 activities last year in remembrance of those who perished on September 11. Photo by Marshall Hudson

I’m partway up the Liberty Springs Trail and starting to hurt. I still have some distance to go before reaching the peak of 4,459-foot-high Mt. Liberty and I’m wondering what I’ve gotten myself into. The guidebook says it is 4.1 miles from the trailhead to the summit and should take three to four hours. That means it is also 4.1 miles and another three to four hours back down again after the exertion of going up. The guidebook indicates an elevation gain of 3,150 feet between parking lot and summit and describes the hike as “difficult.” I’d describe it as being on a relentless stair-stepper machine for eight hours while wearing a 25-pound backpack and being eaten by mosquitoes. Why am I doing this?

I’m with a team of like-minded trekkers scaling the mountain with the goal of flying Old Glory on the summit. In addition to the usual mountain hiking gear, we are also packing flagpole parts, guy wires, ropes, duct tape and a large American flag. These components are divvied up amongst team members to minimize the extra weight any one person might carry. My portion consists only of camera and notebook, so perhaps I’m getting off easy.

Our headcount was 22 when we left the trailhead, but like the Pied Piper of Hamelin, we’ve been picking up others in groups of twos and threes and fours along the way. By the time we break tree line and start climbing the rocky pyramid dome, we are a colorful, sweaty band 44 strong with three dogs. Our team is not alone on this mission; similar teams are ascending all 48 of New Hampshire’s 4,000-foot mountains with the shared goal of flying the flag between noon and 2 p.m. for the annual Flags on the 48 memorial hike.

Flags on the 48 is a grassroots effort by volunteers who believe that those who died in the terrorist attacks on September 11, 2001, should never be forgotten. Experienced mountain hikers and passionate nonhikers join forces each September to raise American flags on New Hampshire mountaintops in memory of the lives lost on that day. This memorial service originated three days after the 9/11 attack as Americans were reeling from the devastating news, wanting to fight back but finding little they could do. Six hikers found a way to express their emotions by climbing Mt. Liberty and raising a 96-square-foot American flag on the summit. Perhaps an insignificant event, but it was symbolic, patriotic, demonstrated a defiant unbroken American spirit, and paid tribute to the rescuers and thousands of innocent people who died in the attacks. Their effort received a tremendous outpouring of support. Volunteers who wanted to participate if it were to be done again came forward, and the Flags on the 48 memorial hike was born.

Over the next couple of years, more volunteers joined the initiative, and more flags were raised on more mountaintops. Reactions from participants and observers were overwhelmingly positive and the effort continued to grow. By 2004, all 48 peaks were covered, and what had started as a small tribute by six hikers now involved hundreds. 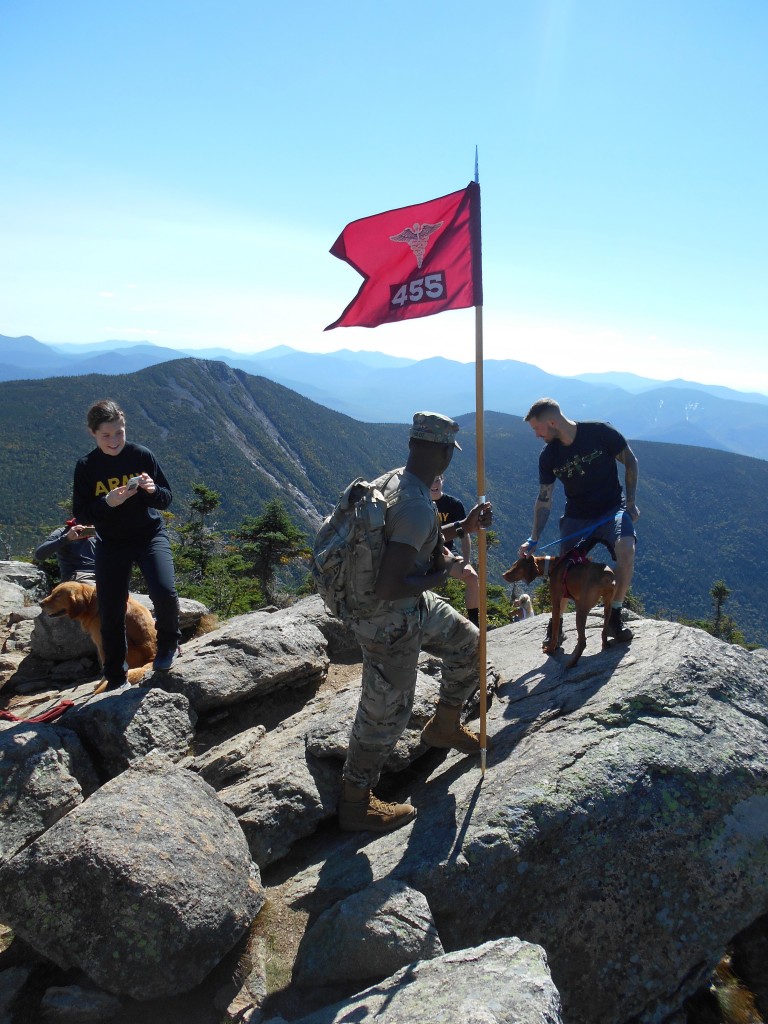 Volunteers from the 455th Medical Company carried their Guidon to the summit. Photo by Marshall Hudson

Collectively the Flags on the 48 memorial hike is done in memory of those who lost their lives in the attacks, and to show support for the servicemen and women placed in harm’s way as a result of the events of that day. But speaking individually with those hiking today, I learn that everyone has a personal reason for participating:

George from Hollis lost two co-workers on 9/11 who were traveling on a flight bound for California. Rick from Manchester was at Ground Zero just after the attack and saw the building rubble still smoldering. Denny from Nashua is 78 and knew one of the people killed in the attack. Brian from Manchester is 63 and this is his 14th time participating. He will serve as chaplain and lead the prayer and moment of silence on the top.

Ann had family in New York City. One of her relatives worked in the towers and was running late for work that morning. She caught the subway later than usual and was stuck in it for hours. Family members didn’t know if she was dead or alive. If she had been on time for work that morning, she probably wouldn’t have survived.

Jackie and Michelle are 24 and from Swampscott. When they attended elementary and high school, their classes would halt mid-morning for a moment of silence each September 11th, but after graduating they felt a void in the lack of memorial services, so they wanted to be a part of this one.

Alex deployed to Afghanistan in 2012 with the 91st Engineering Battalion, 1st Cavalry Division. Jennifer from Nashua is doing FOT-48 for the third time. She is hiking with friends Jessi, Erin and Amanda, all in their early 30s and all have people in their lives who served in the military in response to the 9/11 attack. Volunteers from the 455th Medical Company out of Ft. Devens are here in battle dress uniform to carry their Guidon to the summit.

We reach the peak and assemble the flagpole. It is windy and guy anchors are secured before the flag is raised. A prayer and a few words are spoken, followed by a moment of silence. A list of names of those who perished is placed on the summit. I learn that on other mountains “Taps” is sounded by someone who packed a bugle up the mountain. Hikers share memories and photos of family members or friends tragically lost on that day.

The panoramic vista is cloudless, and to the north I see another group raising the flag on Mt. Lincoln. Across the valley to the southeast, the colors are being unfurled on Mt. Flume. With binoculars off to the west, I can make out flags on Kinsman and Cannon. Overhead, a Blackhawk helicopter circles with crew members hanging out the door and giving us the thumbs-up. The mood is both exhilarating and somber. At 2 p.m., with our goal achieved and respects paid, the flag is lowered and folded like a tricorner hat. We stow the pole and guy lines and pick up everything, leaving no trace we were there. Not wanting to be caught on the mountain after dark, there is an urgency upon us and hurting a bit more, I start back down.

Categories: What Do You Know

The post Blowing in the Wind appeared first on New Hampshire Magazine.