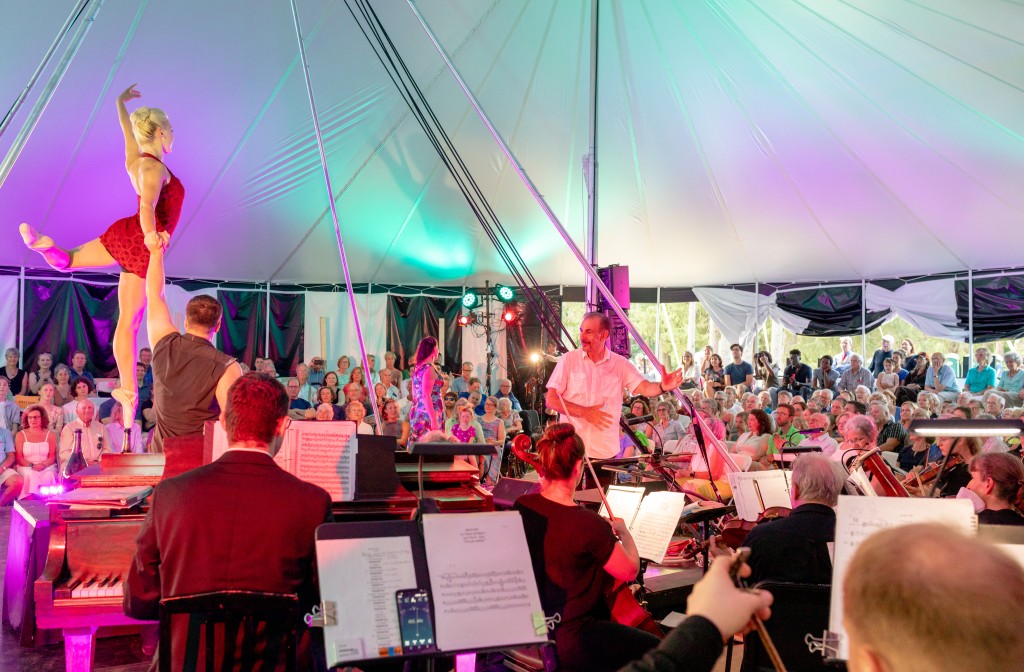 New Hampshire has a rich summer theater tradition, including some of the longest-running and oldest such theaters in the country. All of the many venues are worth a visit, but if you’re looking to take in some fresh air along with a performance, here are some outdoor productions.

This July, Opera North is celebrating not just the return of its unique Summerfest but a major anniversary — 40 years as the only full-time professional opera company in the tri-state region of New Hampshire, Vermont and Maine. From July 8 to 31, Opera North invites you to visit the extraordinary venue of Blow-Me-Down Farm on the banks of the Connecticut River in Cornish during four different performances.

In 2017, the National Park Service chose Opera North to partner in the creation of a park for the arts at the 46-acre property, which is deeded to the adjacent Saint-Gaudens National Historic Park. Augustus Saint-Gaudens was one of America’s great sculptors, and he lived seasonally in Cornish starting in 1885 and year-round from 1900 to his death in 1907. The sculptor’s friends — some of the most talented artists, musicians and writers in the country — joined him there, creating what became known as the Cornish Colony. Today, you can visit the gorgeous home and grounds, which is sprinkled with Saint Gaudens’ sculptures.

This outdoor music festival is held on the Cheshire Fairgrounds in Swanzey from June 24-25. See northlandslive.com for more details, including information on camping and other accommodations.

Admission is $30 per car (up to six people). Milford, milforddrivein.com

Admission is $30 per car (up to four people, $5 per each additional person). Laconia, weirsdrivein.com

Admission is $12 for adults, $7 for children under 12, or add a dollar to each for the triple feature (cash only). Hinsdale,
northfielddrivein.com

Opera North is reviving that artistic spirit, and Summerfest is a fantastic opportunity to be a part of the exciting process. Summerfest kicks off with the showpiece “Carnevale,” July 8-10, a blend of high-flying circus aerialists, humor, slapstick and music held under the big tent. This year’s traditional opera performances, sung in Italian with English subtitles, are “Così fan tutte,” July 21-23 and “La Traviata,” July 27-31. Both feature the full Opera North orchestra. Wrapping up the season is “Bette, Babs & Beyond,” July 30, a tribute to Bette Midler, Barbara Streisand, Whitney Houston, Aretha Franklin and more. This is a special picnic concert on the farm’s lawn. Learn much more about the Cornish Colony and Opera North’s endeavors at Blow-Me-Down Farm in the story “The Cornish Colony Reborn” online at nhmagazine.com/the-cornish-colony-reborn, and visit operanorth.org to purchase Summerfest tickets.

Newer to the theater scene, the nonprofit, award-winning Winnipesaukee Playhouse was founded in 2004, and was soon regarded as a cultural gem. While you should definitely check out the beautiful 194-seat theater (housed in a can’t-miss bright-red barn building), there’s something special about catching an outdoor show on a warm summer evening after a day on the lake. This summer and into early September, three shows are planned for the outdoor amphitheater in Meredith: “The Complete Works of William Shakespeare (Abridged) [Revised]” from June 29-July 9, “Robin Hood” from August 3-13, and “The Conference of the Birds” from September 7-17. Learn more at winnipesaukeeplayhouse.org

Advice to the Players: If the Shakespearean whirlwind at the Winnipesaukee Playhouse piqued your curiosity, Advice to the Players should be your next stop. This nonprofit troupe of professionals, enthusiastic community members and teens brings the challenging yet rewarding words of the Bard to life in a number of ways, but each summer they perform one play outside in Sandwich. This year, the mainstage production is “All’s Well That Ends Well,” running during Sandwich Old Home Week in August. Visit advicetotheplayers.org for more information.

The nonprofit North Country Center for the Arts at Jean’s Playhouse in Lincoln offers entertainment from Memorial Day through the end of the calendar year, but summer theater is a highlight. This year, the White Mountains will come alive with “The Sound of Music” as the beloved classic is performed outside at Loon’s Pemi Base Camp July 7-9. The area’s natural beauty will serve as backdrop for the musical, which is accompanied by a six-piece band. Find details at jeansplayhouse.com.

This nonprofit center in Columbia is an indoor and outdoor performance space that hosts concerts, plays, art shows, arts and crafts activities, community events and even overnight accommodations for visiting artists and performers. It’s also the home of two other North Country groups, the Connecticut River Artisan Group and the Carriage Lane Players. As of press time, plans were still underway for the 2022 season, but expect a wide range of entertainment the whole family can enjoy. Keep an eye out for the calendar at gnwca.org.

Held on the banks of the Piscataqua River in historic downtown Portsmouth, this 10-week-long family-friendly celebration of the arts includes everything from film and concerts to dance and theater. The annual musical is the festival’s centerpiece and this year’s “Footloose” will not disappoint dance and music lovers. Based on the popular 1984 film starring Kevin Bacon, the crowd-pleasing on-stage version delivers dynamic new songs and the powerhouse hits from its bestselling Oscar-nominated score.  With more than 30 performances, you’ll have plenty of chances to spread your blanket on the grass to take in the spectacle under the stars. See prescottpark.org for more information.