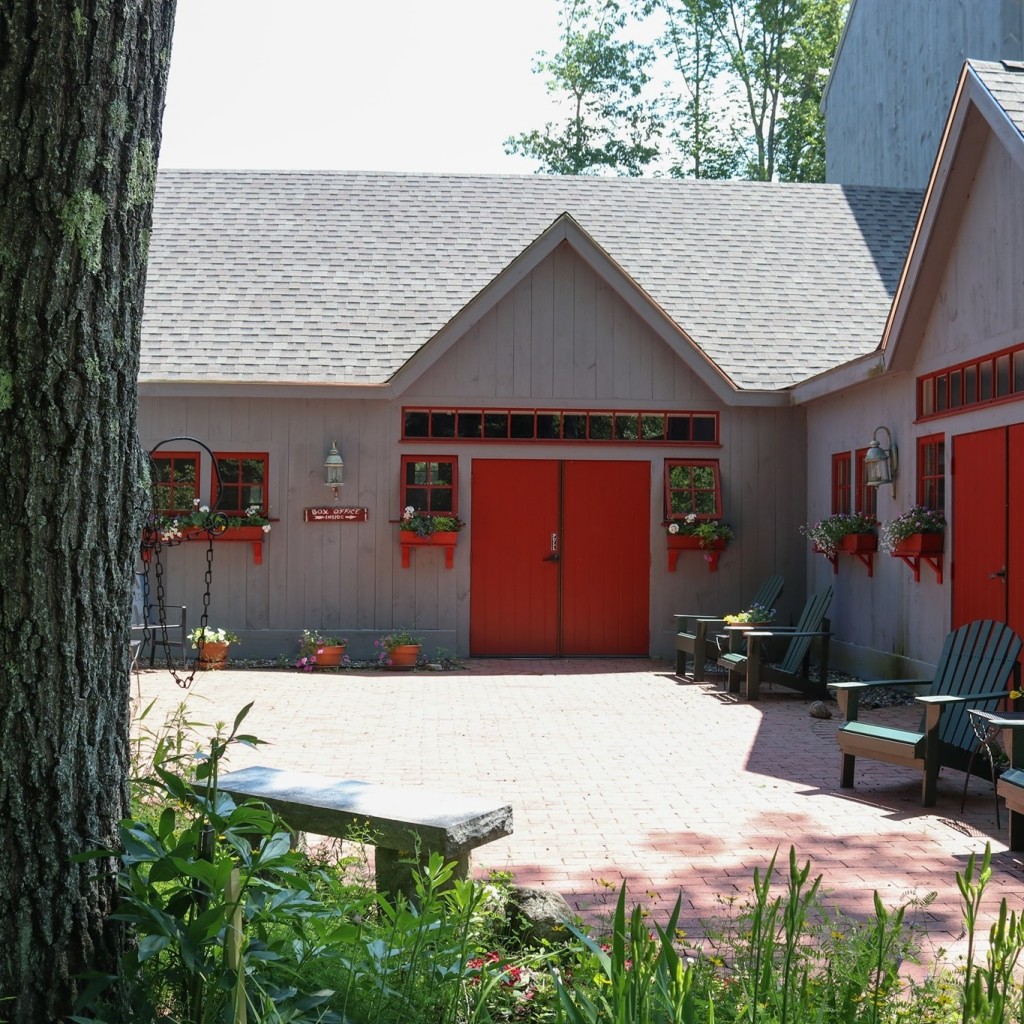 For our latest profile, check out the Peterborough Players. We spoke to Marketing Director Bridget Beirne to learn more about how the Players present their work in an intimate theater located in a converted 18th-century barn at historic Stearns Farm, three miles from downtown Peterborough. Read on to learn all about how the theater has established a reputation for itself as a prime destination in the region.

Tell us about the history of your theater.
Bridget Beirne: “Founded in 1933 during the depths of the depression by a single mother named Edith Bond Stearns, the Peterborough Players is a New Hampshire cultural treasure – an 88-year-old, fully professional equity theater in a historic barn, 3 miles outside of downtown Peterborough. The theater offers a traditional summer season from June through September and a three-play winter season, augmented by opera and theater on screen including ‘The Met: Live in HD’ opera series and plays from London’s National Theatre. For nine decades, the Players has produced professional theater at a level of quality that has gained the theater a significant national reputation that has been recognized in major national publications: ‘American summer repertory theater at its most accomplished’ – Terry Teachout, ‘The Wall Street Journal.’”

What makes your venue special or different?
Bridget: “Our beautiful, historic barn is one of many things that makes the Players the gem that it is. Over the years, ‘the barn’ has been renovated from a charming but rustic facility to a 250-seat theatre while deliberately retaining its historic charm. This year, thanks to a generous donation, we’ll be christening our outdoor Elsewhere Stage, a new performance space on the grounds of the Players. The Players produces a challenging repertoire ranging from the classics to the best of contemporary theater, world premieres, and recently an annual selection from the rich canon of musical theater. In addition, we fulfill our historic mission to develop and train young theater artists through our Second Company of interns and apprentices who spend the summer season learning all aspects of the craft. However, if you were to ask any of our patrons, staff, or company members what sets our theater apart, they would undoubtedly use the word ‘home.’ The Players has a reputation for providing a home to our family of artists, as well as our family of patrons. As the saying goes, ‘Once a Player, always a Player.’ It is a unique and enduring feeling that’s existed through generations. In fact, the most common greeting at the opening of our summer season is, ‘Welcome home!’”

What are you best known for?
Bridget: “Exceptional professional theater, extraordinary artists and staff, unbelievably supportive patrons, a warm, welcoming atmosphere, and a training program that creates the next generation of theatrical professionals.”

Tell us about the most memorable play you’ve done.
Bridget: “After 88 years, it’s impossible to pick just one! Perhaps one of the plays we’re best known for is Thornton Wilder’s ‘Our Town.’ The ownership of this Pulitzer Prize winning American play is strongly felt by the residents of Peterborough (long rumored to be the inspiration for Grover’s Corners, whether confirmed or not…). The Players has a long and intimate connection to ‘Our Town’ – since our first production in 1940, on which Thornton Wilder himself consulted, it has become our most produced play to date. Two particularly memorable productions of ‘Our Town’ at the Players occurred in 2000 and 2008, when the great James Whitmore graced the stage as the Stage Manager. An amazing performance.”

Tell us about what you have been up to this season. Do you have anything exciting planned for 2021?
Bridget: “The past year has given us an opportunity to imagine how we will be an even better Peterborough Players. In addition to the public health concerns brought about by the pandemic and the need to put audience, performer, and staff safety first, there is a renewed call for equity, diversity, and inclusion in the theater and the world right now. We want to answer this call. As a result, we have spent our intermission not only planning for when we can produce live theater again, but also asking bigger questions: ‘Who do we want to be? What can we do now to help ensure the future of the Players? What is the theater’s responsibility to this town, this region, and beyond?’ We envision a chance to create art with gratitude for all the support that has been shown us and with a sense of renewed energy in knowing we have an opportunity to be part of the healing.

In addition, although the Players weren’t ‘live’ in 2020, we created some exciting things! Beyond planning the how’s and when’s of returning to the stage, we launched ‘Players Online,’ a series of virtual offerings created to support what we do onstage and give audiences a peek ‘behind the curtain.’ Our most popular offering, ‘Playgroup,’ is a series of 2-session workshops with different theatrical experts that give our patrons a chance to deep-dive into certain topics, ask questions, and watch the theatrical process come to life virtually, right in their living rooms.

We’re thrilled to say that the Players plans to restart with three plays this summer, beginning in early August. All will be produced in a way that is safe and comfortable for our audiences, as well as inclusive and equitable for our artists. We’ll be announcing the full Grand Restart lineup for this summer on May 3rd. All three fabulous shows will be performed open-air, outside this year.

We can share that our first production will be the only play the Players could have returned with after COVID – of course, ‘Our Town.’ In a Players’ first, this production will be performed onsite, outdoors in downtown Peterborough.”

What keeps you passionate about doing what you do?
Bridget: “It’s impossible not to feel passionate about what we do. The theater is a living, breathing artform. Every day we have the opportunity to create or support a piece of art, or an artist, to enrich the lives of our patrons, to make something new and exciting. We tell stories for a living – what could be more exciting than that?”

How can people best support you right now?
Bridget: “Beyond buying a ‘Curtain Up! Pass’ (on sale May 3rd) and coming to see us this summer, we are grateful for any generous donations sent to the Players. Donations can be made online by visiting the homepage of our website www.peterboroughplayers.org and clicking “Donate to the Players” or over the phone with our box office at (603) 924-7585.”

The post Behind the Curtain: Peterborough Players appeared first on New Hampshire Magazine.