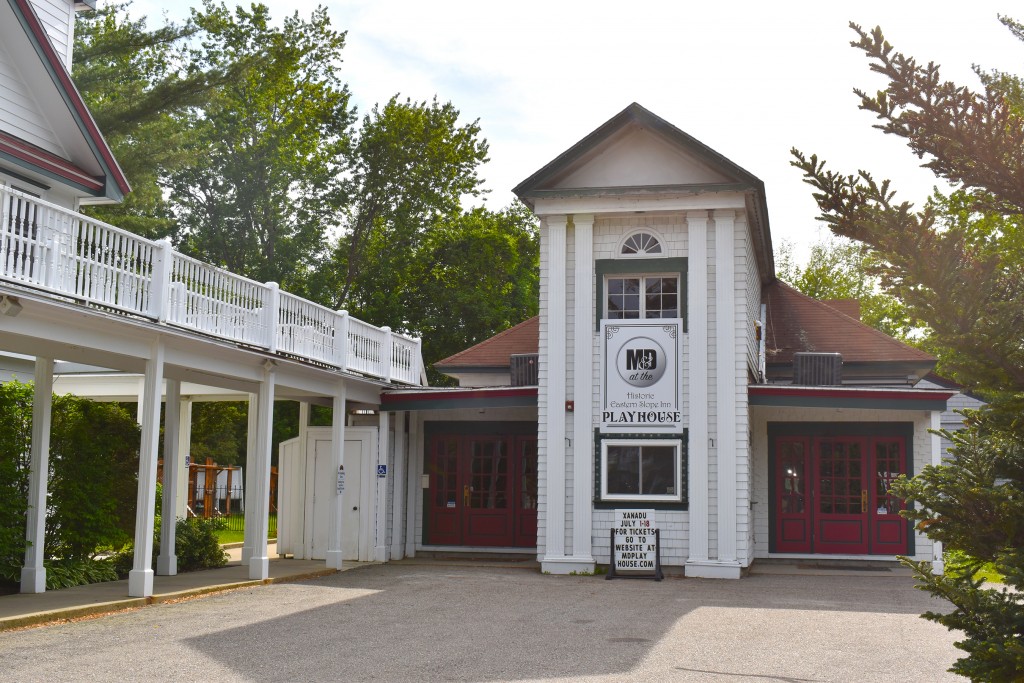 For our latest profile, check out M&D at the Eastern Slope Inn Playhouse. We spoke to Marketing Director Paula Jones to learn more about how the theater has dedicated its efforts to produce plays which inspire, nurture, challenge, amaze, educate, and empower artists and audiences, in order to foster a more conscious and compassionate community. Read on to learn all about their mission to celebrate and enhance personal understanding through the shared experience of live theater.

Tell us about the history of your theater.
Paula Jones: “Originally built in 1869, the historic Eastern Slope Inn Playhouse, once named The Music Room, has a storied past. Over the years, it has been known as the center of North Conway’s performing arts. In the 1950s to early 60s, a group presented summer dramas. While many of the shows were exciting, the playhouse still looked like a dance hall, with a flat floor.
In 1971, the Mt. Washington Valley Repertory Theatre Company installed theater seats on risers and produced classics by Shaw and Shakespeare, original works and an occasional musical performed by a talented group of Dartmouth and Williams graduates and friends, including actors Gordon Clapp, David Strathairn, and filmmaker John Sayles. In 1983, the format changed to all-musical and, once again, the old Music Room was alive with song, the sound of Broadway musicals in the White Mountains. In early 2019, M&D Playhouse became the theater in residence. It was founded in 2000 by Ken Martin and Mark DeLancey with the idea that theater had a responsibility to educate as well as entertain, and M&D continues the rich history of live theater while adding to the vibrancy of the arts community in the Mt. Washington Valley.”

What makes your venue special or different?
Paula: “The playhouse is an historic gem! It seems everyone who visits has a fond memory from a childhood visit. Its location in the heart of North Conway Village makes it convenient for theater goers to arrive early, park, and stroll the village for shopping or dining before the show. We have a full-service bar for drinks and snacks, and a garden area perfect for relaxing and smaller outdoor functions during the warmer months.”

What’s the story behind the name of your theater?
Paula: “The playhouse was named after the famous Eastern Slope Inn Resort.”

What are you best known for?
Paula: “M&D is best known for its consistently well-produced, year-round, community theater whether it is drama, comedy, or musicals, alike. With over 37 NH Theatre awards, including the Francis Grover Cleveland Lifetime Achievement Award for founding director Ken Martin and the NETC Award for Excellence in the American Theatre, M&D is also known for the impressive quality of shows, actors, directors, and lighting and stage design that all work together to make a successful production.”

Tell us about the most memorable play you’ve done.
Paula: “In spring 2016, M&D produced The Dixie Swim Club to rave reviews. Everything aligned perfectly from set design to direction to the cast of five women whose friendship grew throughout the rehearsal process and translated on stage to create the genuine feeling of the lifelong friendship the characters shared. The show was so well received that as word of mouth spread, a great many people expressed regret for having missed it, many wanted to see it again and four months later, for the first time in M&D’s history, a show was brought back by popular demand to a sellout crowd most performances.”

Tell us about what you have been up to this season. Do you have anything exciting planned for 2021?
Paula: “While we did experience some measure of success with our digital content during the challenges of the past year, there is nothing like live theater and we are so excited to be back on stage for our 2021 season. We are producing a full line-up of shows beginning with the opening of ‘Xanadu’ on July 1.”

What keeps you passionate about doing what you do?
Paula: “Through theater, we can reach out and make a difference in how someone feels, thinks, and relates to others, and that is a gift we get to give. If any lessons were learned this past year it is how much the arts enrich our lives and how much we miss it when it is gone. We love bringing these opportunities to our stage and offering our local talent a place to explore their creativity. We will continue to work hard to help people understand the value live theater brings to all in our community.”

How can people best support you right now?
Paula: “Come enjoy a show at M&D Playhouse at the Historic Eastern Slope Inn Playhouse. Donate to us or another arts organization. Spread the word about the value of live theater, dance and music. Wherever you live, we hope you appreciate and support the arts in your own community!”

The post Behind the Curtain: M&D at the Eastern Slope Inn Playhouse appeared first on New Hampshire Magazine.