Milk punch almost sounds like what you might receive if you offended a toughie in a bad ’30s pulp novel. “He bumped into my dame when we were walking in the apple. He went to make tracks, but my doll went bananas, so I gave him a milk-punch right in the kisser, see — the old one-two!”

But milk punch is a drink with a much older provenance. First created in the 1600s, it became quite popular in the 1700s into the mid-1800s. Mary Rockett published the first milk punch recipe, and such notables as Ben Franklin and Charles Dickens were early fan-boys. Her Majesty Queen Victoria actually issued a royal warrant to Nathaniel Whisson & Co. to provide the palace with the beverage.

Although there is a style of non-clarified milk punch, such as eggnog, this article will focus on the more shelf-stable variety known as clarified milk punch. The possibilities for liquor/spice/fruit juice combinations are endless, and I have toyed with jalapeño Mezcal versions featuring blood orange, or brandy with allspice and pomegranate. I wanted to create a drink that brought in warm spices and the boldness of dark rum, to warm the body and the soul as the snow starts to accumulate.

This recipe requires 10 days of prep time, and requires a quantity of vessels, which my wife usually laments (every time I cook anything!), but once it is made, it is refrigerator-stable for up to a year. Don’t rush it, it will be worth the wait! 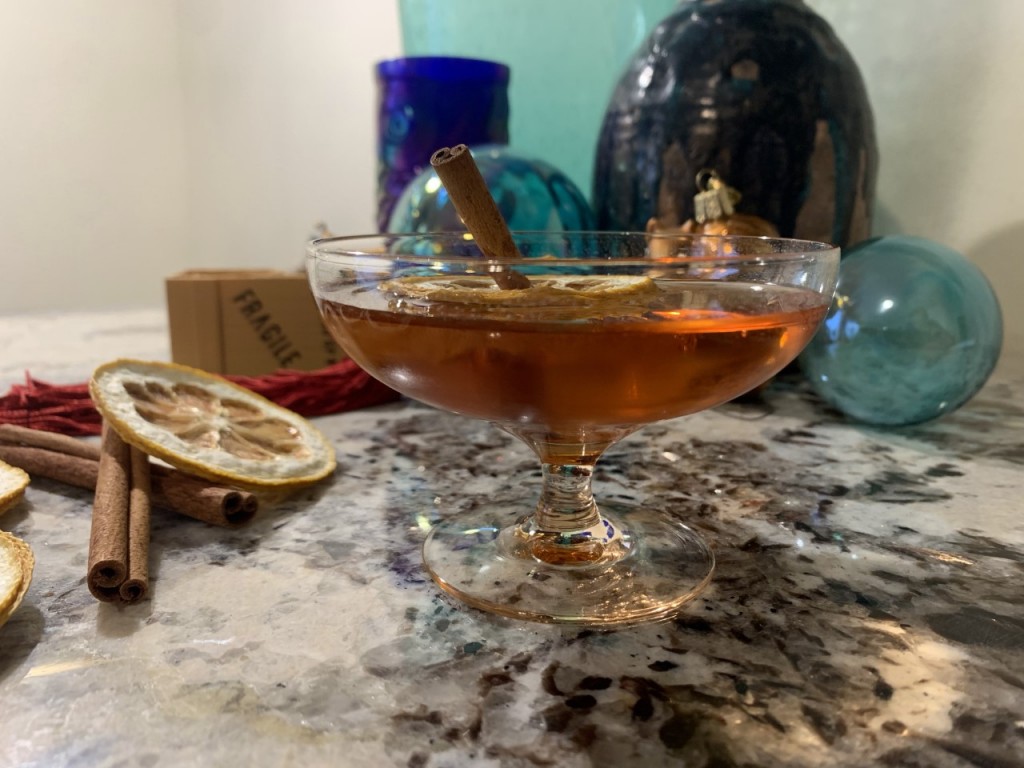 Dram Prep:
Crush the nutmeg roughly (the nutmeg likes it that way), I find placing them in a paper bag and hitting with a hammer or skillet effective. In a 325-degree oven, lightly toast nutmeg, cinnamon and vanilla for 3-4 minutes. Add this to the rum in a sealed quart jar and give it 10 days to think about what it’s done. After it repents, strain through a fine strainer into a saucepan over low heat, add sugar, and stir until sugar is dissolved, 10-15 minutes.

Punch Prep:
Boil 21/4 cups water in a large saucepan and let cool for a minute, pour over tea bags and steep 3 minutes. Do not squeeze them, despite the temptation. Add sugar and dissolve, then add port, rum, dram and lemon juice. Let that chill as you ponder the universe for 20 minutes.

Pour the milk into a large glass pitcher, and follow with the tea mixture. This is where we go to funkytown, as the milk curdles. It takes a while for this to happen, so waste an hour on social media or pacing the streets talking to yourself incoherently (really the same thing). Don’t molest the milk! It needs to be left alone with its thoughts. It will be checking your Facebook status periodically.

Place a coffee filter in a fine strainer, and strain the mixture into a large (4-quart) container. This can take up to two hours, and gets slower as the process progresses.

Once again, leave it alone as it does its thing.

The resultant nectar is ready to chill and serve. Store it in a 2-quart mason jar in the fridge for up to a year, if you don’t drink as fast as I do.

I suggest a classic coupe glass, with a garnish of a cinnamon stick and/or a dehydrated lemon slice. It doesn’t require shaking or stirring with ice, as it is already at fridge temp, which makes this a perfect drink for entertaining — just garnish and serve.

Until we meet again, at a bar or in my backyard, keep your glass full!